The Ministries of Ghana and South Africa announce the combination of ‘first light’ science observations which confirm the successful conversion of the Ghana communications antenna from a redundant telecoms instrument into a functioning Very Long Baseline Interferometry (VLBI) radio telescope.

Ghana is the first partner country of the African Very Long Baseline Interferometer (VLBI) Network (AVN) to complete the conversion of a communications antenna into a functioning radio telescope. The 32-metre converted telecommunications antenna at the Ghana Intelsat Satellite Earth Station at Kutunse will be integrated into the African VLBI Network (AVN) in preparation for the second phase construction of the Square Kilometre Array (SKA) across the African continent. The combination ‘first light’ science observations included Methanol Maser detections, VLBI fringe testing and Pulsar observations. Reaching these three objectives confirm that the instrument can operate as a single dish radio telescope and also as part of global VLBI network observations, such as the European VLBI network. Following the initial ‘first light’ observations, the research teams from Ghana and South Africa together with other international research partners, continue to do more observations and are analysing the data generated with the aim to characterise the system and improve its accuracy for future experiments.

“The Ghanaian government warmly embraces the prospect of radio astronomy in the country and our radio astronomy development plan forms part of the broader Ghana Science, Technology and Innovation Development Plan,” says Professor Kwabena Frimpong-Boateng, the Ghana Minister of Environment, Science, Technology and Innovation (MESTI). As an SKA Africa partner country, Ghana welcomed and collaborated with the SKA South Africa (SKA SA)/HartRAO (Hartebeesthoek Radio Astronomy Observatory) group to harness the radio astronomy potential of the redundant satellite communication antenna at Kutunse. A team of scientists and engineers from SKA SA/HartRAO and the Ghana Space Science and Technology Institute (GSSTI) which is under MESTI, has been working since 2011 on the astronomy instrument upgrade to make it radio-astronomy ready. In 2012, Ghana launched the GSSTI as the vehicle through which to grow its astro-physics programme.

The South African Department of International Relations and Cooperation (DIRCO) has been funding a large part of the conversion project through the African Renaissance and International Cooperation Fund (ARF). The South African Minister of DIRCO, Ms Maite Nkoana-Mashabane says, “The African Renaissance Fund is aimed at strengthening cooperation between South Africa and other African countries and to support the development of skills and build institutional capacity on the continent.” Nine African partner countries are members of the SKA AVN, including Botswana, Ghana, Kenya, Madagascar, Mauritius, Mozambique, Namibia, South Africa, and Zambia.

“A vital part of the effort towards building SKA on the African Continent over the next decade is to develop the skills, regulations and institutional capacity needed in SKA partner countries to optimise African participation in the SKA,” says the South African Minister of Science and Technology, Mrs Naledi Pandor. The AVN programme is aimed at transferring skills and knowledge in African partner countries to build, maintain, operate and use radio telescopes. Minister Pandor continued by saying: “It will bring new science opportunities to Africa on a relatively short time scale and develop radio astronomy science communities in SKA partner countries.”

The Leverhulme-Royal Society Trust and Newton Fund in the UK are co-funding extensive human capital development programmes in the SKA AVN partner countries. A seven-member Ghanaian team has undergone training in South Africa and have been trained in all aspects of the project including the operation of the telescope. Several PhD students and one MSc student from Ghana have received SKA SA bursaries to pursue further education in various fields of astronomy and engineering while the Royal Society has awarded funding in collaboration with Leeds University to train two PhDs and 60 young aspiring scientists in the field of astrophysics. Based on the success of the Leverhulme-Royal Society programme, a joint UK-South Africa Newton Fund intervention (the Development in Africa with Radio Astronomy (DARA)) has since been initiated in other partner countries to grow high technology skills that could lead to broader economic development in Africa. This Newton Fund programme is providing a pool of talented young people who have been inspired by astronomy to ultimately play a leading role in the emergence of new economies.

A Ministerial Forum comprising Ministers from the nine SKA AVN partner countries convenes on an annual basis to provide strategic and political leadership on the cooperation with the SKA and AVN projects, and on other relevant radio astronomy programmes and initiatives. The next SKA AVN Ministerial Forum will be held in Accra, Ghana in August when the Kutunse radio telescope will officially be launched.

The Ghana Intelsat Satellite Earth Station at Kutunse is situated at an elevation of 70 metres above sea level. Kutunse is a suburb located about 25 kilometres north-west of the national capital, Accra. The station was commissioned on 12 August 1981, and was operated by the Ghana Telecommunications Corporation until 3 July 2008, when Ghana Vodafone took over as major shareholder with a 70% share of the station. The SKA SA/HartRAO team assessed the suitability of the 32-metre Beam Waveguide antenna and the Kutunse control station for radio astronomy through two successive working visits in March and May 2011. The conversion work started when the station was handed over from Vodafone to the Ghanaian state under the management of GSSTI.

Once the refurbishment and conversion was completed, a commissioning team looked at how the telescope performed during the process of blind tracking and how it is affected by factors such as gravity as the antenna rotates. The team checked the effect of Radio Frequency Interference (RFI) and how well the antenna does a full rotation. For Phase 1, the existing telecommunication feed horn was used in the frequency range 3.8 – 6.4 GHz (C-band). For the actual science observations (Phase 2), an uncooled 5 GHz and 6.7 GHz (C-band) receivers were fitted.

Future receiver developments may include replacing the original C-band feed horn with a wider band design covering more VLBI bands and introducing cryogenic receivers for improved sensitivity and adding more frequency bands. Future changes could be according to the science programme of the GSSTI, in collaboration with global partners.

The science requirements
The newly refurbished radio telescope has two modes of operation: to form part of global VLBI networks (including the African VLBI Network, as it grows) and also operate as a single radio telescope. To meet both these needs, each function has its own set of required capabilities that the station has to satisfy. Ghana will lead and determine the single dish programme.

For the VLBI component, the station requires capacity for: mapping interstellar masers in star-forming regions in the Milky Way; determining the distances to star-forming regions in the Milky Way through methanol maser parallax measurements; using trigonometric parallax measurements to determine accurate pulsar distances as well as pulsar proper motions; imaging active galactic nuclei (AGN); and other important functionalities. The longitude and latitude geographic location of the station is significant for astrophysics research.

The following groups of individuals and institutions are recognised for the participation, collaboration and support in realising this momentous milestone.

The scientists at the JIVE ERIC in the Netherlands and the broader European network added tremendous value through Dr Jay Blanchard, Support Scientist for the JUMPING JIVE project. 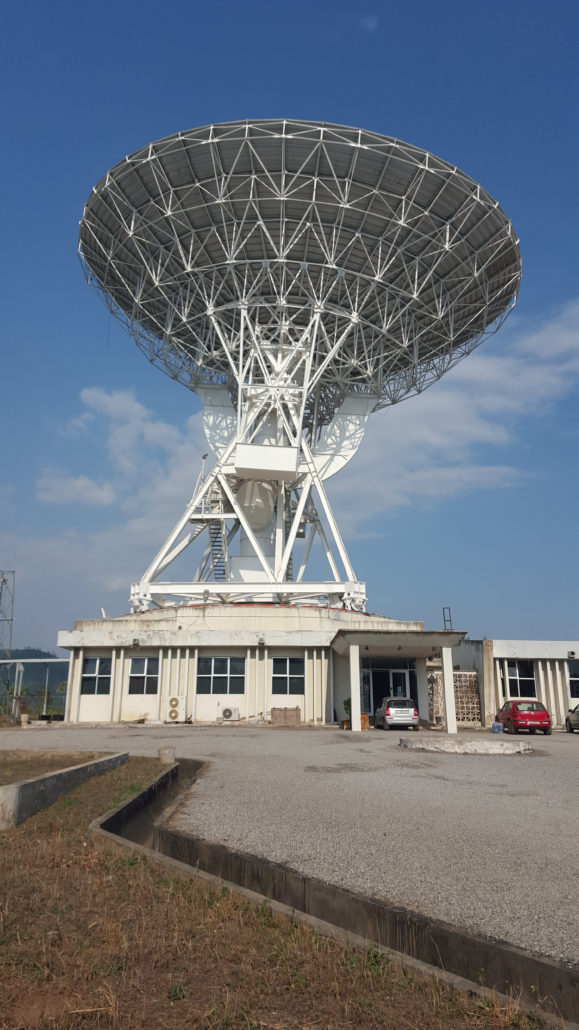