Astronomers reveal best image yet of mysterious ORCs in space

Astronomy’s newest mystery objects, odd radio circles or ORCs, have been pulled into sharp focus by an international team of astronomers using the world’s most capable radio telescopes.

First revealed by the ASKAP radio telescope, owned and operated by Australia’s national science agency CSIRO, odd radio circles quickly became objects of fascination. Theories on what caused them ranged from galactic shockwaves to the throats of wormholes.

A new detailed image, captured by the South African Radio Astronomy Observatory’s MeerKAT radio telescope and published today in Monthly Notices of the Royal Astronomical Society (DOI 10.1093/mnras/stac701), is providing researchers with more information to help narrow down those theories.

There are now three leading theories to explain what causes ORCs: 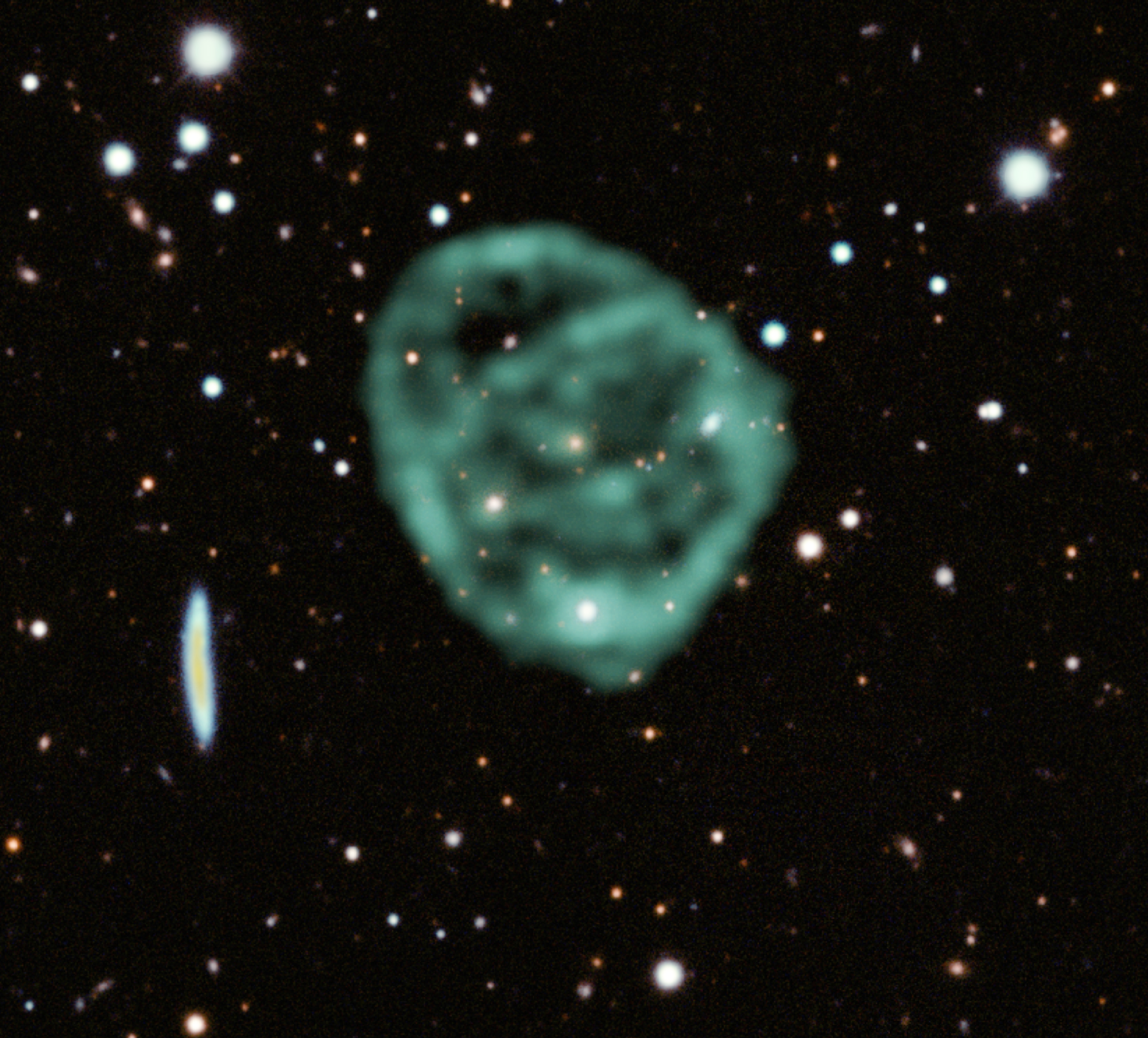 The MeerKAT Stokes-I image of ORC1, superimposed on optical data from the Dark Energy Survey DR1 (Abbott et al. 2018), both spanning the same field of view. A square root transfer function was applied to the radio data of the field of view and this grayscale image was then adjusted for contrast. An image of the radio data confined to the ORC region was assigned mint green. This region was blended with the greyscale radio continuum field of view image and the DES optical image of the same field, so that faint radio sources outside the ORC appear as faint grey diffuse patches, often surrounding their host galaxies. The filters used in the DES image were assigned turquoise, magenta, yellow and red, with the result that DES sources mainly appear in this image as white. The layering schema employed is described in English (2017). Image credit: Jayanne English (University of Manitoba) with support from Ray Norris, Jordan Collier and the Evolutionary Map of the Universe team; data from MeerKAT and the Dark Energy Survey at Cerro Tololo Inter-American Observatory.

To date ORCs have only been detected using radio telescopes, with no signs of them when researchers have looked for them using optical, infrared, or X-ray telescopes.

Dr Jordan Collier of the Inter-University Institute for Data Intensive Astronomy, who compiled the image from MeerKAT data said continuing to observe these odd radio circles will provide researchers with more clues.

“People often want to explain their observations and show that it aligns with our best knowledge. To me, it’s much more exciting to discover something new, that defies our current understanding,” Dr Collier said.

The rings are enormous – about a million light years across, which is 16 times bigger than our own galaxy. Despite this, odd radio circles are hard to see.

Professor Ray Norris from Western Sydney University and CSIRO, one of the authors on the paper, said only five odd radio circles have ever been revealed in space.

“We know ORCs are rings of faint radio emissions surrounding a galaxy with a highly active black hole at its centre, but we don’t yet know what causes them, or why they are so rare,” Professor Norris said.

Dr Fernando Camilo, Chief Scientist of the South African Radio Astronomy Observatory, which built and operates MeerKAT, said that “the ORC project is a great example of the clever use of MeerKAT by its users, playing to its strengths: ASKAP observes large swaths of the sky and can discover relatively rare types of objects; MeerKAT can then follow up to study them in greater detail.”

To really understand odd radio circles scientists will need access to even more sensitive radio telescopes such as those of the SKA Observatory, which is supported by more than a dozen countries including South Africa, Australia, the UK, France, Canada, China and India.

“No doubt the SKA telescopes, once built, will find many more ORCs and be able to tell us more about the lifecycle of galaxies,” Professor Norris said.

“Until the SKA becomes operational, ASKAP and MeerKAT are set to revolutionise our understanding of the Universe faster than ever before.”

ASKAP is located on Wajarri Yamatji country in Western Australia, and MeerKAT is located in the Northern Cape province of South Africa.

Notes to the editor

MeerKAT, originally the Karoo Array Telescope, is a radio telescope inaugurated in 2018 consisting of 64 antennas spread over a diameter of 8 kilometres in the Northern Cape province of South Africa. It is the most sensitive telescope of its kind in the world and is a precursor to the Square Kilometre Array (SKA) radio telescope, to be built in South Africa and Australia within the coming decade.

The South African Radio Astronomy Observatory (SARAO), a facility of the National Research Foundation, is responsible for managing all radio astronomy initiatives and facilities in South Africa, including the MeerKAT telescope, and the geodesy and VLBI activities at the HartRAO facility. SARAO also coordinates the African Very Long Baseline Interferometry Network (AVN) for the eight SKA partner countries in Africa, as well as South Africa’s contribution to the infrastructure and engineering planning for the SKA. To maximise the return on South Africa’s investment in radio astronomy, SARAO is managing programmes to create capacity in radio astronomy science and engineering research, and the technical capacity required to support site operations.

The Inter-university Institute for Data Intensive Astronomy is a partnership of three South African universities, the Universities of Cape Town, of the Western Cape and of Pretoria as well as the South African Radio Astronomy Observatory. IDIA runs ilifu, a scientific cloud computing facility designed for big data, such as that coming from the MeerKAT telescope or emerging from bioinformatics research.

The overarching goal of IDIA is to build within the South African university research community the capacity and expertise in data intensive research to enable global leadership on MeerKAT large survey science projects and large projects on other SKA pathfinder telescopes.

ASKAP is a radio telescope owned and operated by Australia’s national science agency, CSIRO. ASKAP is an SKA-precursor telescope. This means it has been testing out novel technologies on a future SKA site, which will enhance our view of the sky. ASKAP’s special ability is scanning the sky (called a survey) to find new, rare, faint or hard-to-detect objects in our Universe, like fast radio bursts. It is the fastest sky-scanning telescope in the world, undertaking the feat in less than two weeks – other telescopes would take nearly two years to complete such a task in such detail.

With 36 dishes at 12 metres diameter, ASKAP covers 6km of the Murchison Radio-astronomy Observatory in Western Australia, located on the traditional lands of the Wajarri Yamatji people. ASKAP is part of the Australia Telescope National Facility, assisting scientists all over the world.