How we tune in to “listen” to the universe

In much the same way that you tune your radio to listen to your favourite music, radio astronomers can tune their telescopes to pick up the radio waves that come from quasars, other distant galaxies and the cosmic microwave background that are millions of light years from the Earth.

Radio astronomers don’t often listen to these radio signals with their ears, but rather use computers to make sense of it.

They can unravel signals from pulsars, quasars, masers, distant galaxies and other mysterious objects in the universe. They use the information to study the birth and death of stars, the violent lives of galaxies and sometimes even to hunt for extraterrestrial life.

What are radio waves?

Radio waves are the same sort of waves as light. The difference is the length of the waves is much longer than it is for light. For example, the radio waves your FM radio receives have a wavelength of 3 metres, and your microwave oven produces radio waves with a wavelength of about 10 centimetres.

How does a radio telescope work?

A radio telescope is a very sensitive receiver of radio waves. It has two basic components to help us to decipher the meaning of the radio waves that it detects:

This information is then processed with the help of computers. To help make sense of the strings of numbers, astronomers turn the numbers into pictures. Each of these numbers represents information from a specific point in space. Astronomers often assign specific colours to these numbers according to the amount of information they represent. They then combine the colours to make a picture so that they information can then be “seen”. These pictures tell us about many characteristics of the objects in the universe.

What kinds of work are related to radio astronomy?

There are many exciting things you can do if you are interested to work with radio astronomers, or perhaps be involved in designing one of the telescopes of the future.

People cause a lot of radio wave interference with their cell phones, radio and television broadcasts, air traffic, and many other radio devices. Therefore, radio telescopes must be built as far away as possible from big cities.

South Africa has a 26-m diameter radio telescope (that’s a huge dish!) at the Hartebeesthoek Radio Astronomy Observatory in a valley west of Krugersdorp. Hills around this site help to shield the radio telescope from radio signals from Tshwane and Johannesburg, for example from microwave ovens and cellphones.

South Africa is currently building the Karoo Array Telescope, or MeerKAT, a mid-frequency ‘pathfinder’ or demonstrator radio telescope, near Carnarvon in the Northern Cape. It will be the largest and most sensitive radio telescope in the southern hemisphere until the SKA is completed.

But, most exciting of all, the majority of the SKA – the full dish array and the dense aperture array – will be built in Africa. The core – i.e. the region with the highest concentration of receivers – will be constructed in the Northern Cape Province, about 80 km from the town of Carnarvon (the same site as where the MeerKAT is being constructed).

How do I become a radio astronomer?

You can’t do it without mathematics and physical sciences! With a matric exemption in both of these subjects at higher grade, you’ll be off to a good start. Computer science will also help! At university you will study astronomy and physics, before going on to more specialised postgraduate studies.

Poster about the electromagnetic spectrum

Poster about our solar system

Poster about your place in our amazing Universe

Poster about the electromagnetic spectrum 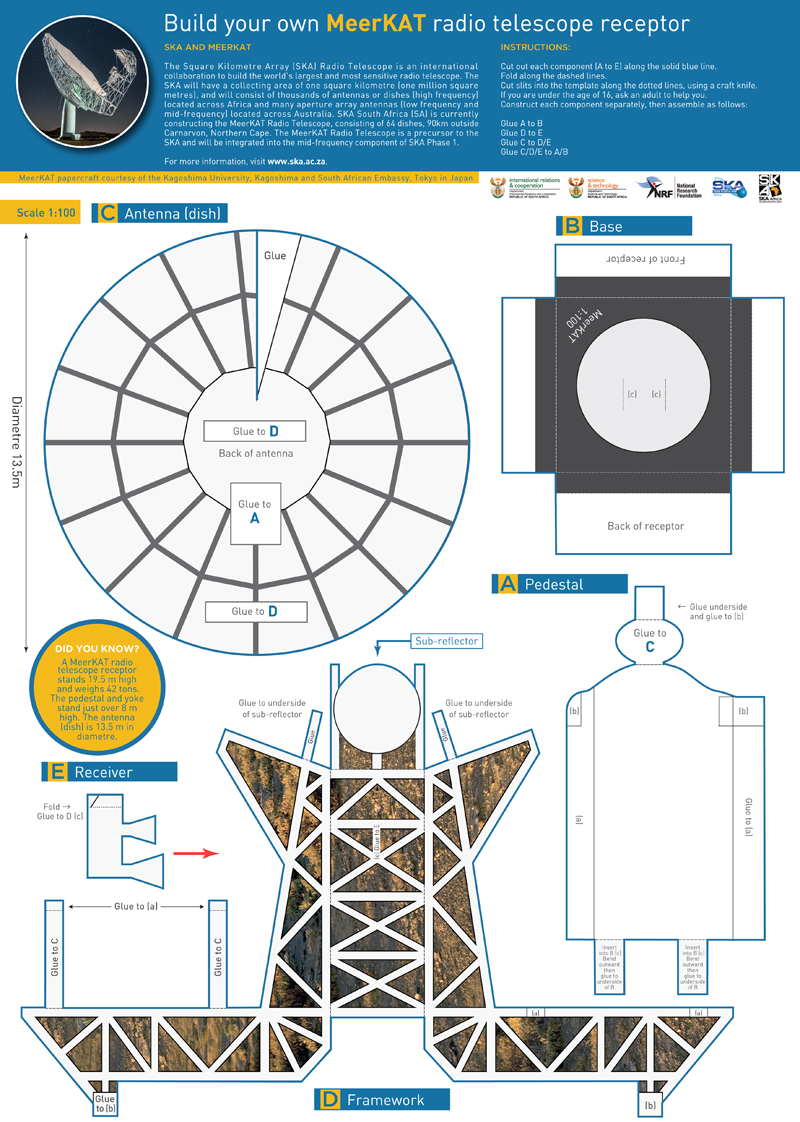