The Brandvlei Stofskoppers, a rieldans troupe from Brandvlei in the Northern Cape, returned home with superstar status after they received a standing ovation and calls of “Encore!” at the Scifest Africa official opening on Friday, 10 March 2017.

The troupe, consisting of eight learners from Brandvlei Intermediate School in Brandvlei, Northern Cape, performed for VIPs and the general public before and during the official opening of the National Science Festival by Minister of Science and Technology, Naledi Pandor.

The troupe’s visit to the festival was supported by SKA SA, and included participation by the learners and their educator, Thomas Arendse, in festival activities.

Lead female dancer, Luwandri Schräder, said that the highlights of the troupe’s festival experience included the Scifest Africa laser show; meeting NASA Deputy Chief Technologist (Ret.), Jim Adams; and the science show by Germany’s Die Physikanten. “It was also a wonderful experience staying in a school hostel with learners from other provinces. Many of us have never travelled outside of the Northern Cape province, and learning about other South African cultures was eye-opening.”

The rieldans, one of the oldest dance forms in South Africa, was born out of traditional Khoi and San ceremonial dances performed around a fire, and has been practiced by descendants of these indigenous people for many years. Recognised as a form of cultural expression, riel dances typically tell the story of a playful courtship using fancy footwork, showmanship and colourful outfits. 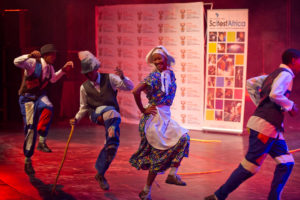