Two giant radio galaxies have been discovered with South Africa’s powerful MeerKAT telescope. These galaxies are amongst the largest single objects in the Universe and are thought to be quite rare.

The fact that MeerKAT detected two of these monsters in a relatively small patch of sky suggests that giant radio galaxies may actually be much more common than previously thought. This gives astronomers further vital clues about how galaxies have changed and evolved throughout cosmic history.

The discovery has been published today, Monday, 18 January 2021 in the Monthly Notices of the Royal Astronomical Society.

Many galaxies have supermassive black holes residing in their midst. When large amounts of interstellar gas start to orbit and fall in towards the black hole, the black hole becomes ‘active’ and huge amounts of energy are released from this region of the galaxy.

In some active galaxies, charged particles interact with the strong magnetic fields near the black hole and release huge beams, or ‘jets’, of radio light. The radio jets of these so-called ‘radio galaxies’ can be many times larger than the galaxy itself and can extend vast distances into intergalactic space. 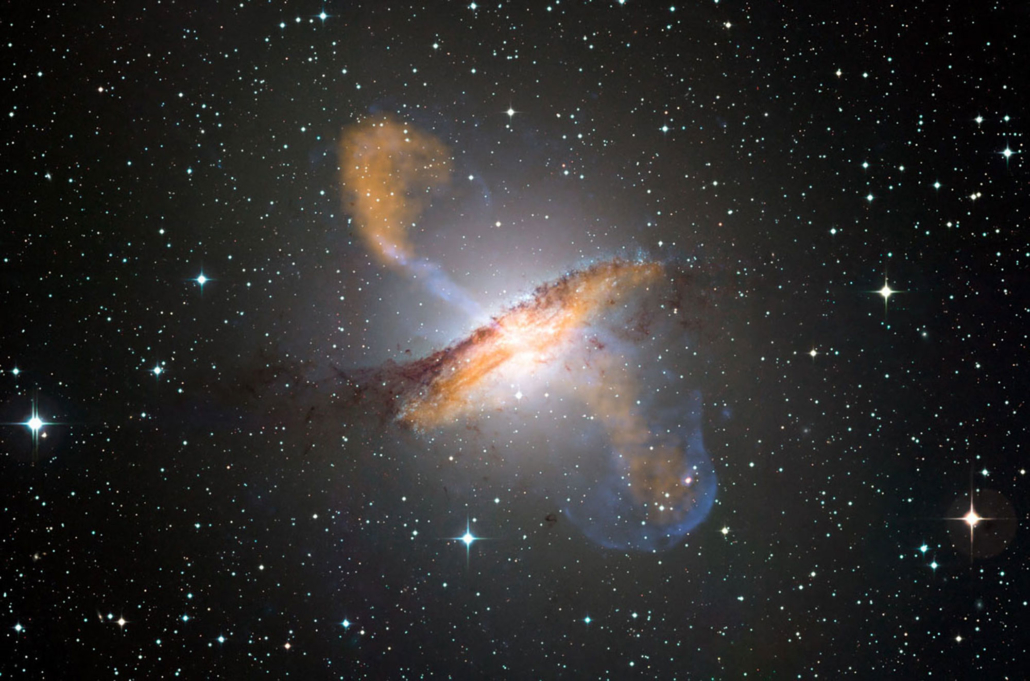 Above: Centaurus A is a famous example of a relatively nearby radio galaxy. Inside the galaxy is a supermassive black hole which is generating the large jets which can be seen emerging perpendicular to the disc of the galaxy. Credit: ESO/WFI (Optical); MPIfR/ESO/APEX/A.Weiss et al. (Submillimetre); NASA/CXC/CfA/R.Kraft et al. (X-ray).

Dr Jacinta Delhaize, a Research Fellow at the University of Cape Town and lead author of the work, said “Many hundreds of thousands of radio galaxies have already been discovered. However, only around 800 of these have radio jets exceeding 700 kilo-parsecs in size, or around 22 times the size of the Milky Way. These truly enormous systems are called ‘giant radio galaxies’.”

Despite the scarcity of giant radio galaxies, the authors found two of these cosmic beasts in a remarkably small patch of sky.

Dr Delhaize said, “We found these giant radio galaxies in a region of sky which is only about 4 times the area of the full moon, though the galaxies are much further away and much larger than the moon. Based on our current knowledge of the density of giant radio galaxies in the sky, the probability of finding two of them in this region is extremely small.”

“This means that giant radio galaxies are probably far more common than we thought!”

Dr Matthew Prescott, a Research Fellow at the University of the Western Cape and co-author of the work, said, “These two galaxies are special because they are much bigger than most other radio galaxies. They are more than 2 Mega-parsecs across, which is around 6.5 million light years or about 62 times the size of the Milky Way. Yet they are fainter than others of the same size.”

“We suspect that many more galaxies like these should exist, because of the way we think galaxies should grow and change over their lifetimes.”

The giant radio galaxies were spotted in new radio maps of the sky created by the MEERKAT International Gigahertz Tiered Extragalactic Exploration (MIGHTEE) survey. It is one of the large survey projects underway with South Africa’s impressive MeerKAT radio telescope and involves a team of astronomers from around the world. 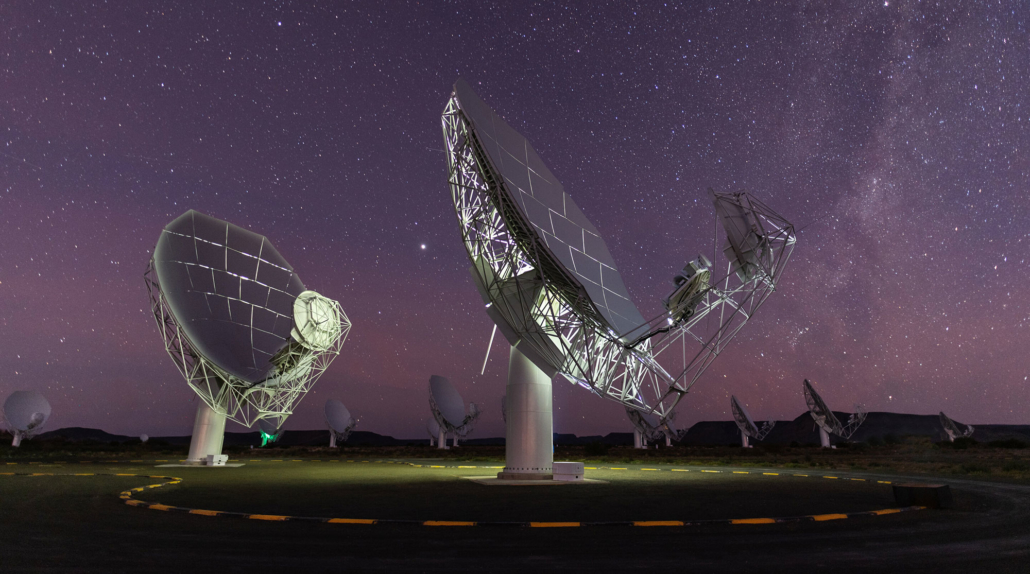 The two giant radio galaxies have never been identified before, despite the sky region having already been observed by other radio telescopes such as the Karl G. Jansky Very Large Array in the USA, and the Giant Metre-Wave Radio Telescope in India.

Dr Ian Heywood, a co-author at the University of Oxford, said “The MeerKAT telescope is the best of its kind in the world. We have managed to identify these giant radio galaxies for the first time because of MeerKAT’s unprecedented sensitivity to faint and diffuse radio light.”

“This made it possible to detect features that haven’t been seen before. We found large-scale radio jets coming from the central galaxies, as well as fuzzy cloud-like lobes at the ends of the jets.”

“We know that these galaxies are several billion light years away, and so it was the discovery of these enormous jets and lobes in the MIGHTEE map that allowed us to confidently identify the objects as giant radio galaxies.” 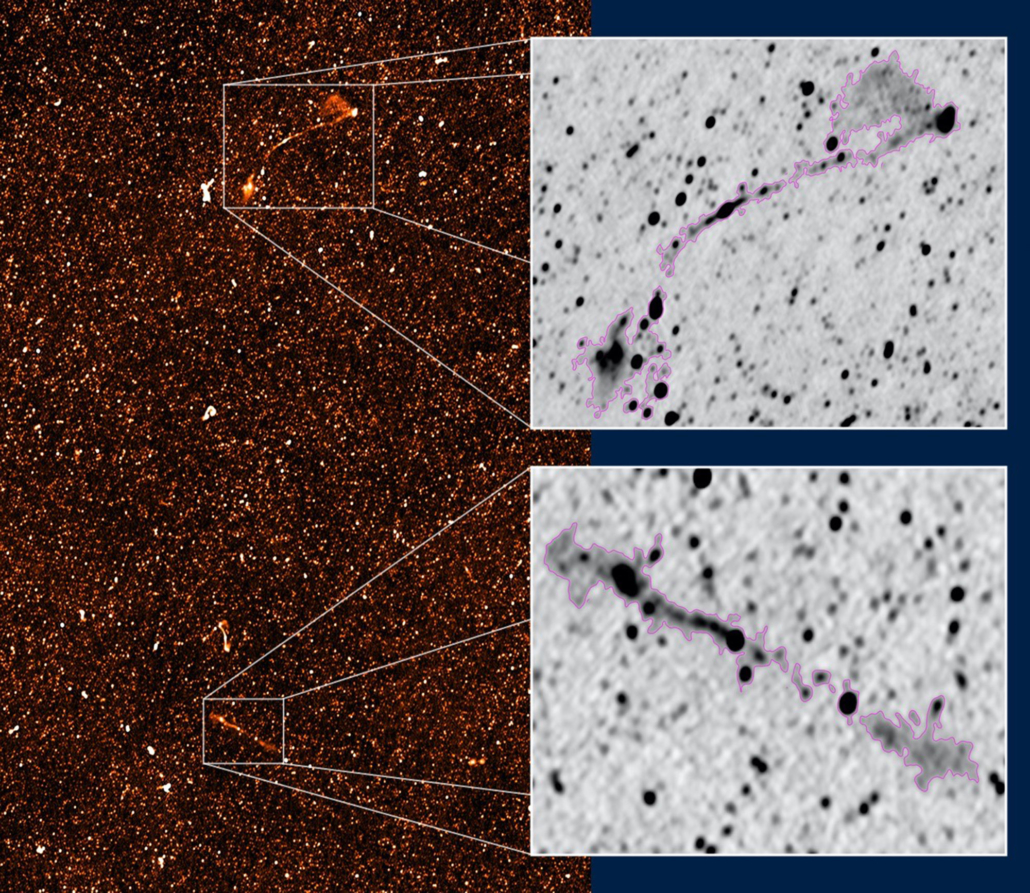 Above: Part of the MIGHTEE radio map of the sky. A zoom in of each giant radio galaxy is shown in greyscale. The purple line traces around the radio emission from the giants. Image credit: I. Heywood (Oxford/Rhodes/SARAO).

Why only very few radio galaxies have such gigantic sizes has been somewhat of a mystery. It is thought that the giants are the oldest radio galaxies, which have existed for long enough (several hundred million years) for their radio jets to grow outwards to these enormous sizes. If this is true, then many more giant radio galaxies should exist than are currently known.

With the discovery of objects like these giant radio galaxies, a clearer understanding of the evolutionary pathways of galaxies is beginning to emerge.

“In the past, this population of galaxies has been hidden from our ‘sight’ by the technical limitations of radio telescopes. However, it is now being revealed thanks to the impressive capabilities of the new generation of telescopes.”

“We hope to uncover more of these giant galaxies in the MIGHTEE survey as it progresses. We also expect to find many more with the future Square Kilometre Array (SKA) telescope. The SKA will reveal larger populations of radio galaxies than ever before and revolutionise our understanding of galaxy evolution.”

Construction of the highly anticipated trans-continental SKA telescope is due to commence in South Africa and Australia in 2021 and continue until 2027. Science commissioning observations could begin as early as 2023.

MIGHTEE
The MeerKAT International Gigahertz Tiered Extragalactic Exploration (MIGHTEE) survey is a Large Survey Project being conducted with the MeerKAT telescope. Its overarching goal is to study the formation and evolution of galaxies. The principal investigators are Prof Matt Jarvis (University of Oxford) and Prof Russ Taylor (University of Cape Town, IDIA). Further details: http://idia.ac.za/mightee/

MeerKAT
The MeerKAT telescope is located in the Karoo region of South Africa and is comprised of 64 radio dishes. It was inaugurated in July 2018. MeerKAT is managed by the South African Radio Astronomy Observatory (SARAO), which is a facility of the National Research Foundation. Further details: https://www.sarao.ac.za/science/meerkat/