At a historic meeting of its Council last week, the recently formed SKA Observatory (SKAO) saw its Member States approve the start of construction of the SKA telescopes in Australia and South Africa.

The two telescopes, currently designated SKA-Low and SKA-Mid, names which describe the radio frequency range they each cover, will be the two largest and most complex networks of radio telescopes ever built.

The decision to approve construction follows the creation of the SKAO as an intergovernmental organisation earlier this year, and the publication of two key documents, the Observatory’s Construction Proposal and Observatory Establishment and Delivery Plan, last year. The documents are the culmination of over seven years of design and engineering work by more than 500 experts from 20 countries to develop and test the technologies needed to build and operate the state-of-the-art telescopes. Eleven international consortia representing more than 100 institutions including research labs, universities and companies from around the world, designed the antennas, networks, computing, software, and infrastructure needed for the telescopes to function.

“I am ecstatic. This moment has been 30 years in the making,” said SKAO Director-General Prof. Philip Diamond. “Today, humankind is taking another giant leap by committing to build what will be the largest science facility of its kind on the planet; not just one but the two largest and most complex radio telescope networks, designed to unlock some of the most fascinating secrets of our Universe.”

“I would like to thank everyone who has contributed to making this possible over the past decades, from the early inception of the project until now, and in particular all the teams who have worked so hard over recent years and powered on through a pandemic in very difficult circumstances to meet deadlines and make this milestone possible. I would also like to thank our Member States for their vision and the trust they’re placing in us by investing in a large-scale, long-term research infrastructure at a time when public finances are under intense pressure.”

“I would like to add my thanks to the members of the SKAO Council and the governments they represent,” said Dr Catherine Cesarsky, Chairperson of the SKAO Council. “Giving the green light to start the construction of the SKA telescopes shows their confidence in the professional work that’s been done by the SKAO to get here, with a sound plan that is ready for implementation, and in the bright future of this ground-breaking research facility.”

In addition to delivering exciting and revolutionary science, the construction of the SKA telescopes will produce tangible societal and economic benefits for countries involved in the project through direct and indirect economic returns from innovation and technological spin-offs, new high-tech jobs and boosted industrial capacity, among others. The well-documented impact prospect of the SKA Project (detailed in the Construction Proposal), outlining the multiple benefits already flowing to Member States and their communities thanks to their involvement in SKA-related activities over the last few years, was a key part of the case for the project. 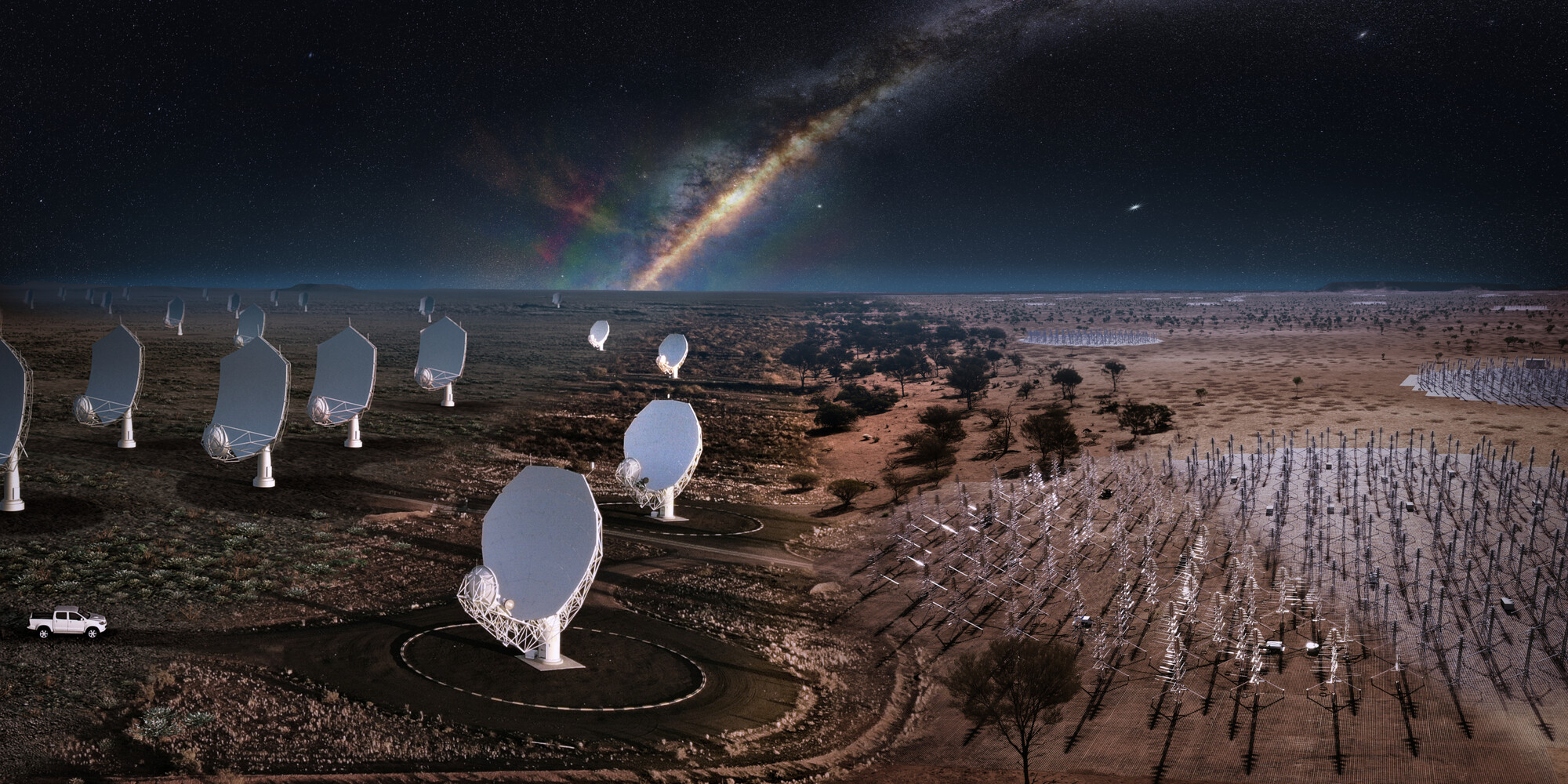 Take a look at how the two SKA sites in Australia and South Africa will look when the telescopes are complete! These images blend photos of real hardware already on the ground at both sites with artist’s impressions of the future SKA antennas. The day and night composites of the two sites combine all elements in South Africa and Australia. Credit: SKA Observatory.

The SKA Project has seen impressive progress in recent months, with the successful completion of the ratification process of the SKAO treaty by all seven initial signatories, Australia, China, Italy, the Netherlands, Portugal, South Africa and the United Kingdom; excellent progress from France and Spain towards membership of the Observatory; and the signature of a cooperation agreement with Ecole Polytechnique Fédérale de Lausanne on behalf of Switzerland, with the Swiss government announcing its intention to eventually join the SKAO, pending approval from Parliament on the funding required for the participation of Switzerland until 2030. Other countries, including those that also took part in the design phase of the SKA telescopes (Canada, Germany, India, and Sweden), and other more recent joiners such as Japan and South Korea, complete the select list of Observers in the Council.

“Today’s commitment by Member States is a strong signal for others to get aboard and reap the benefits of participation in this one-of-a-kind research facility,” added Dr Cesarsky.

The cost of constructing the two telescopes and the associated operations and business-enabling functions will be €2billion over the period 2021 – 2030.

Over the past few years, the excitement in the science community about using the SKA telescopes to answer some of the most fundamental questions about our Universe, has been growing. Recent meetings have demonstrated this huge scientific interest, with close to 1,000 scientists taking part in the latest SKAO Science Meeting in March of this year. More than 1,000 researchers from hundreds of institutions across 40 countries are involved in the SKAO’s Science Working Groups that are working to ensure that the maximum science potential of the new observatory can be quickly realised.

There has been significant engagement between the SKAO’s local partners, the South African Radio Astronomy Observatory (SARAO) and Australia’s Commonwealth Scientific and Industrial Research Organisation (CSIRO), and local communities in preparation for the start of construction. In South Africa, SARAO has a memorandum of understanding with Agri-SA, many of whose members own farms which share boundaries with the MeerKAT radio telescope core or will host antennas part of the SKA-Mid telescope in the three spiral arms.

Respectful dialogue and engagement with Indigenous communities has also been a hallmark of the project, with the signing of a Memorandum of Understanding between the San Council of South Africa and SARAO and, just last week, in‑principle support for the project from the Wajarri Yamaji, the traditional owners of the land on which the SKA-Low telescope will be built.

“The SKAO will be a good neighbour and will work with local stakeholders, and in particular Indigenous communities, to ensure that they also benefit from the SKA project alongside other stakeholders nationally and internationally,” added Prof. Diamond. “We certainly intend to play our part in supporting local communities and boosting the local economy.”

Procurement of major contracts for the SKA telescopes will start immediately, with some market surveys having already been conducted in the past few weeks. Over the coming months, some 70 contracts will be placed by the SKAO within its Member States, with competitive bidding taking place within each country.

The first significant activity on site is due to happen early next year, with construction of the telescopes lasting until 2028. Early science opportunities will start in the next few years, taking advantage of the nature of radio telescope arrays, also known as interferometers, which allow observations with only a subset of the full array. The telescopes are planned to have a productive scientific lifetime of 50 years or more.

The SKAO, formally known as the SKA Observatory, is a global collaboration of Member States whose mission is to build and operate cutting-edge radio telescopes to transform our understanding of the Universe, and deliver benefits to society through global collaboration and innovation.

Headquartered in the UK, its two telescope arrays will be constructed in Australia and South Africa and be the two most advanced radio telescope networks on Earth. A later expansion is envisioned in both countries and other African partner countries. Together with other state-of-the-art research facilities, the SKAO’s telescopes will explore the unknown frontiers of science and deepen our understanding of key processes, including the formation and evolution of galaxies, fundamental physics in extreme environments and the origins of life. Through the development of innovative technologies and its contribution to addressing societal challenges, the SKAO will play its part to address the United Nations’ Sustainable Development Goals and deliver significant benefits across its membership and beyond.

The SKAO recognises and acknowledges the Indigenous peoples and cultures that have traditionally lived on the lands on which the SKAO facilities are located.