An unprecedented international collaboration of telescopes has lead to the first direct detection of gravitational waves – ripples in space and time – in addition to light from the spectacular collision of two neutron stars. The discovery marks the first time that a cosmic event has been viewed in both gravitational waves and light.

The discovery was made using the U.S.-based Laser Interferometer Gravitational-Wave Observatory (LIGO); the Europe-based Virgo detector; and some 70 observatories on the ground and in space observing the event at their representative wavelengths. Square Kilometre Array South Africa’s new MeerKAT telescope, still under construction, contributed by observing the location of the astronomical collision on three separate days between 26 August and 17 September 2017. The sensitive MeerKAT observations indicate that on those days the source was very faint, no brighter than 60 micro-Janskys at a frequency of 1.3 gigahertz.

The gravitational wave signal, dubbed GW170817, was first detected by two identical detectors of LIGO, located in Hanford, Washington, and Livingston, Louisiana, on 17 August 2017. At nearly the same time, the Gamma-ray Burst Monitor on NASA’s Fermi space telescope detected a burst of gamma rays. The information provided by the third detector, Virgo, situated near Pisa, Italy, allowed scientists to better triangulate the position of the cosmic event. The rapid gravitational-wave detection by the LIGO–Virgo team, coupled with Fermi’s gamma-ray detection, enabled the launch of follow-up observations by telescopes around the world.

The LIGO data indicated that two astrophysical objects located at the relatively close distance of 130 million light-years from Earth had been spiralling towards each other. It appeared that the objects were not as massive as binary black holes – objects that LIGO and Virgo have previously detected (and for which the Nobel Prize in Physics for 2017 was recently awarded). Instead, the inspiralling objects were estimated to be in a range from around 1.1 to 1.6 times the mass of the sun, in the mass range of neutron stars. A neutron star is about 20 kilometres in diameter and is so dense that a teaspoon of neutron star material has a mass of about a billion tons. Neutron stars are the smallest, densest stars known to exist and are formed when massive stars explode in supernovae. As these neutron stars spiralled towards each other, they emitted gravitational waves that were detectable on Earth for about 100 seconds; when they collided, a flash of light in the form of gamma rays was emitted and seen on Earth about two seconds after the gravitational waves. In the days and weeks following the astronomical smash-up, other forms of light, or electromagnetic radiation – including X-ray, ultraviolet, optical, infrared, and radio waves – were detected.

The LIGO–Virgo results are published today in the journal Physical Review Letters. The observations have given astronomers an unprecedented opportunity to probe a collision of two neutron stars. “This detection opens the window of a long-awaited ‘multi-messenger’ astronomy,” says David H. Reitze, executive director of the LIGO Laboratory. “It’s the first time that we’ve observed a cataclysmic astrophysical event in both gravitational waves and electromagnetic waves – our cosmic messengers. Gravitational-wave astronomy offers new opportunities to understand the properties of neutron stars in ways that just can’t be achieved with electromagnetic astronomy alone.”

A separate paper being published today in The Astrophysical Journal Letters includes the results obtained by MeerKAT. It summarises the world-wide multi-messenger observations of the binary neutron star merger heralded by GW170817, which is rapidly becoming one of the most widely studied events in the history of astrophysics. This includes crucial visible-light observations by the Southern African Large Telescope (SALT) one day after the merger event; and monitoring by an international network of radio observatories that included SARAO’s HartRAO.

Dr Fernando Camilo, Chief Scientist at the South African Radio Astronomy Observatory (SARAO), says: “The LIGO-Virgo gravitational wave detection and subsequent electromagnetic study of the binary neutron star collision is one of the truly wondrous moments of modern astrophysics. Many of us have dreamt about this event for decades, and it’s more wonderful than we could have imagined. It raises as many questions as it begins to answer.”

Camilo continues: “Deep understanding in this area will come from continued study of the electromagnetic radiation from the remnant of GW170817, which we expect to evolve over weeks and months; and from the detailed study of more such events to follow in the years to come.”

“Currently, the radio waves from this source are too faint for the partially built MeerKAT to detect,” adds Camilo, “but our sensitivity at the radio frequency we use is already among the best in the world, and our scientists and engineers in South Africa are working hard on making it even better.”

In conclusion, Camilo notes that “the initial observations we’re making of GW170817 indicate that we’re already contributing meaningfully in this area – in other words, even as we’re still building it, MeerKAT has started to do science”. 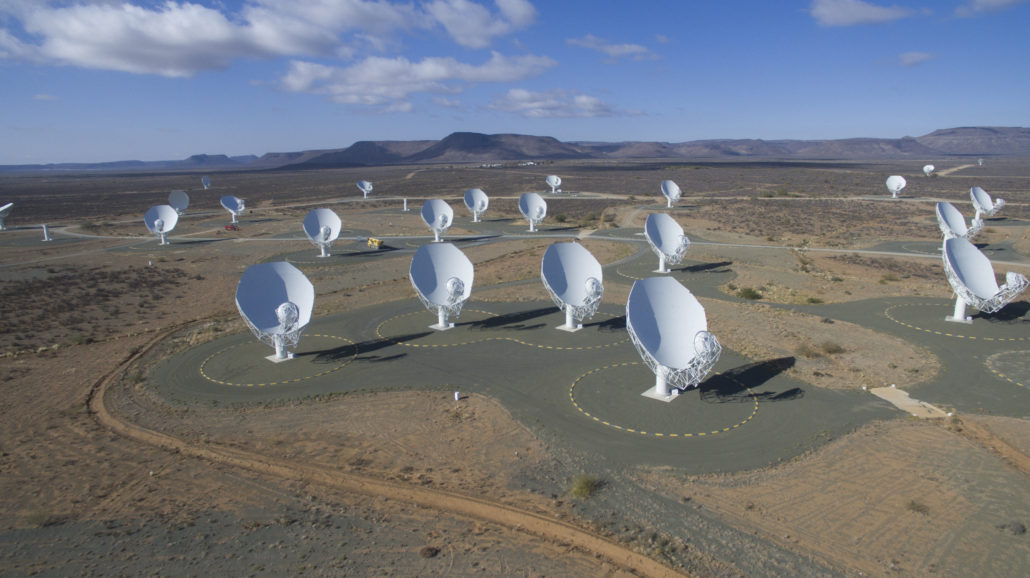 An overview of the MeerKAT radio telescope currently being constructed in the Karoo in the Northern Cape, South Africa. View the MeerKAT photo gallery

NRF Facilities play an important role in the multi-messenger astronomy event; the start of a new field of astrophysics