The first fully assembled SKA dish was unveiled today at a ceremony in Shijiazhuang, China, by the Vice Minister of the Chinese Ministry of Science and Technology, in the presence of representatives from the countries involved and the SKA Organisation. The dish is one of two final prototypes that will be tested ahead of production of an early array.

In a major milestone for the SKA Project, the 54th Institute of China Electronics Technology Group Corporation (CETC54) has completed the structural assembly of the first SKA dish, bringing together components from China, Germany, and Italy.

The state-of-the-art 15-metre diameter dish was unveiled today at a ceremony in Shijiazhuang, China, hosted by the SKA Organisation and the SKA China Office and organised by the Joint Laboratory for Radio Astronomy Technology (JLRAT) and the SKA Dish consortium, supported by the Chinese Ministry of Science and Technology (MOST), the Chinese Academy of Sciences, the National Natural Science Foundation of China and the CETC group.

“This is a major achievement by all the partners involved” said Prof. Philip Diamond, Director-General of the SKA Organisation, which is overseeing the project. “After many years of intense design effort, we have an actual SKA dish, built by an international collaboration between China, Germany and Italy that is very much representative of the global nature of the SKA project.”

“Our Chinese partners are extremely well resourced. They’ve demonstrated that they have the technology and capability to construct a telescope with the specifications that the SKA requires”, adds Mark Harman, SKA Organisation Project Manager for the Dish consortium.

An international effort across 18 time zones

This year will see the culmination of a 3-year effort by an international consortium that includes institutions in China acting as the consortium lead, Australia, Canada, France, Germany, Italy, South Africa, Spain, the United Kingdom and Sweden, overseen by the SKA Organisation.

Across 18 time zones, extensive work has taken place to reach this point as the various teams around the world work towards building a fully functional SKA dish prototype.

CETC54 has been leading the design and production of the prototype dish, in particular the production of its highly precise main reflector, sub-reflector, backup structure, and pedestal.

“This is a mature method developed by CETC54. Applied to the SKA dish, it allows us to achieve and maintain the dish surface to a very precise surface-accuracy level as well as consistency for all panels”, said Wang Feng from the Joint Laboratory for Radio Astronomy Technology (JLRAT), recently appointed SKA Dish Consortium Lead.

In Mainz, Germany, MT Mechatronics (MTM) have been designing and manufacturing the precise hardware and electronics – such as the Drive Units and Electronics – used to move the dish.

“We’ve been entrusted with demonstrating precision engineering in order to move the telescopes with up to a thousandth of a degree accuracy, as well as reliability to produce over 130 such systems behaving equally well.” comments Lutz Stenvers, Managing Director from MTM and SKA Dish Structure Lead Engineer.

In Italy, near Naples, the Società Aerospaziale Mediterranea (SAM) has been working on the design and production of the feed indexer, an electro-mechanical component that will support the various receivers and move them into position to align them with the optics of the dish when required, depending on the observations.

“The feed indexer is a very innovative part of the dish, the first of its kind. We’ve got stringent requirements, as the indexer needs to move with high accuracy to position the receivers with sub-millimetric precision, and it also needs to be able to sustain heavy loads, with for example the Band 1 receiver alone weighing 165kg” explains Renato Aurigemma, the SAM team coordinator.

Today, for the first time, all these components came together at CETC54’s assembly workshop to test how the structure as a whole behaves.

“We will be putting the dish through its paces to see how it responds to different commands and whether it performs as expected” adds Wang Feng. “This will allow us to spot any discrepancies and fine tune the design if needed. The next step will be to test it on site with its instrumentation.”

A second dish, currently under production at CETC54 and funded by the German Max Planck Society, will be shipped to South Africa and assembled at the South African SKA site in the next few months where it will be equipped with its instrumentation and used to conduct real observations for the first time to test its performance and calibrate all the systems.

Onsala Space Observatory at Chalmers University of Technology, Sweden, EMSS Antennas in Stellenbosch, South Africa, and Oxford University and the Science and Technology Facilities Council (STFC) in the United Kingdom have been working on the various receivers that will be fitted on this second dish, covering a broad frequency range from 350 MHz to 15.3 GHz.

Additional institutes involved include the Italian National Institute for Astrophysics (INAF), who are developing the software to monitor, coordinate and control the Dish subsystems. A group of engineers at the National Research Council (NRC) Canada, are developing the hardware that digitises the signals recorded with each of the five receivers while The University of Bordeaux, France contributes their expertise to digitise high frequency signals. SKA South Africa has been leading the System Engineering, which played a key role in coordinating the consortium.

The SKA prototype dish unveiled today is being delivered as part of the consortium’s critical design review – the final stage of design work before construction. It and the Max-Planck funded dish, are the final precursors to a further series of up to six SKA dishes that will form an Early Production Array (EPA), expected to be built on site from 2019 under the leadership of the SKA Organisation.

The EPA will be used to demonstrate a working array, allowing engineers to spot any further design or production issues ahead of full-scale production. Additionally, it will for the first time provide an opportunity to integrate dishes with prototypes of other critical SKA elements provided by their respective design institutions such as the Signal and Data network, the Central Signal Processor where the signals from all dishes are correlated, the Science Data Processor (the imaging software) and the Telescope Manager software used to send commands to the dishes and monitor their status.

“The EPA will allow us not only to bring production and construction forward but it will also allow us to test how key SKA components work together on the field. In essence, it’s bringing the various pieces of this puzzle together to see if they match and produce the image that we expect” concludes Joe McMullin, recently appointed as SKA Programme Director. 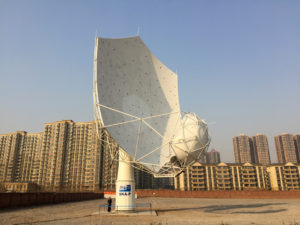