The Hydrogen and Real-time Analysis eXperiment (HIRAX), led out of the University of KwaZulu-Natal (UKZN), has deployed two new prototype telescope dish designs, one aluminium and the other fibreglass, at the South African Radio Astronomy Observatory (SARAO) Hartebeesthoek in Gauteng.

The fibreglass dish was designed and manufactured by MMS Technology in Pretoria, and the aluminium dish was designed and manufactured through a partnership between NJV Consulting and Rebcon in Durban. Funding for the HIRAX prototype dishes was provided by the UKZN and the Department of Science and Innovation through the National Research Foundation.

This milestone marks the successful completion of months of collaboration between the HIRAX project, and local engineering and manufacturing firms, and brings HIRAX one step closer to the installation of the full 1024-dish array in a compact configuration on the HIRAX main site in the Karoo.

This telescope will enable research in the evolution of dark energy through hydrogen intensity mapping, and research on transient radio sources such as fast radio bursts (FRBs) and pulsars. Dark energy is a mysterious force in the Universe that scientists believe is acting against gravity to cause an accelerated expansion of the Universe. FRBs are mysterious millisecond extragalactic flashes in the sky of unknown origin.

Collaboration on the dish design started in the beginning of 2018 with the purpose of defining final dish requirements for the project. The design of these 6-metre dishes has strict tolerances on the shape, surface accuracy, and receiver position. The mechanical design also allows for the manual repointing of the dishes every few months, enabling the instrument to map about a third of the sky over a five-year period while minimising cost by eliminating the need for active drive mechanisms. 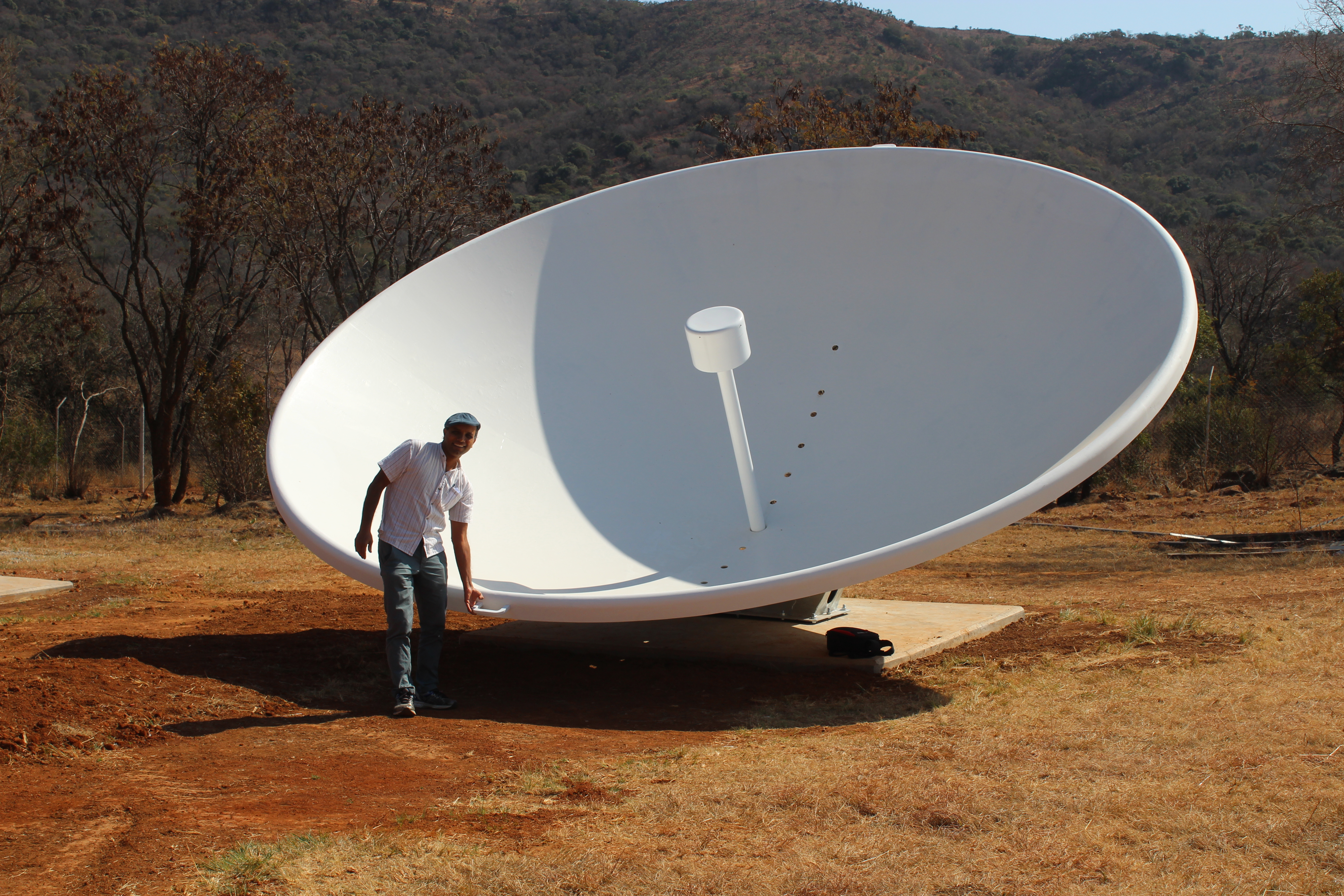 HIRAX will instrument and analyse the two new prototype dishes over the next few months to develop the final requirements for an open tender for the first 256 dishes to be installed at the HIRAX main site in the Karoo.

SARAO Managing Director Rob Adam said: “After the successful testing at our Hartebeesthoek site, we are looking forward to hosting HIRAX at our site in the Karoo. We always had the idea that the SKA site would prove to be an attractor for other leading-edge global astronomy projects and this is turning out to be the case.”

This installation could not have been achieved without the support of the professional staff at the SARAO Hartebeesthoek site. In this context the experience and domain knowledge of SARAO staff have been harnessed to provide support and technical assistance for various aspects of the HIRAX project. All of the current antenna prototyping work is being conducted at the SARAO Hartebeesthoek Observatory site, and SARAO staff at the site have assisted with the installation and testing of the dishes, and the execution of the associated civil infrastructure work.

Cynthia Chiang, HIRAX Instrumentation Lead and Professor at McGill University and Fractional Professor at UKZN, said: “In order to deliver high-precision science, HIRAX has stringent specifications that require custom-built telescope dishes. The two new dishes from MMS and Rebcon represent a significant milestone toward achieving HIRAX’s goals, and it will be crucial for informing the final instrument design.” Both MMS and the NJV/Rebcon collaboration worked hand-in-hand with the HIRAX project to produce prototype designs that will inform final dish requirements for the HIRAX project. 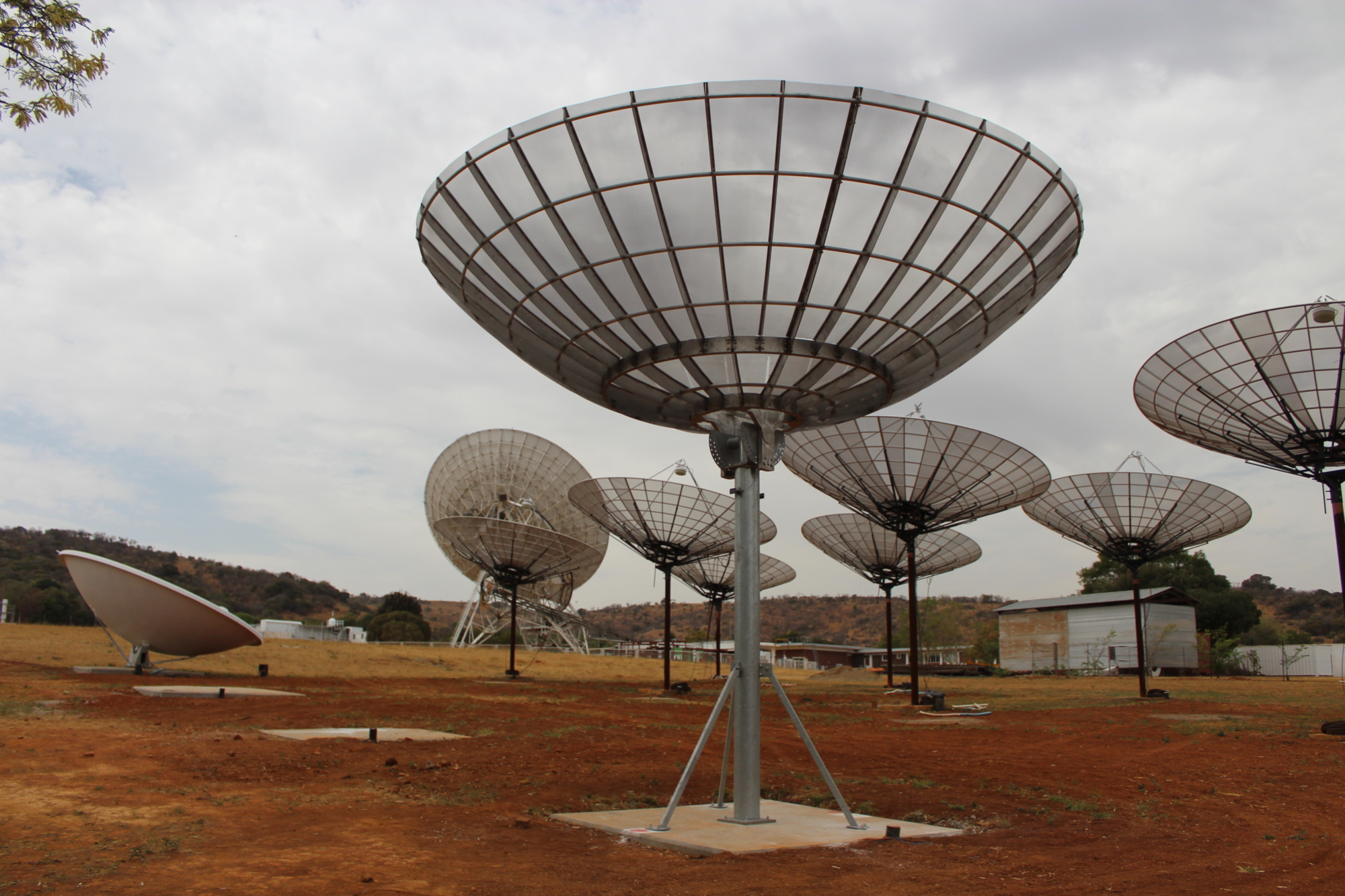 The 10-dish HIRAX prototype array in the foreground featuring the newly installed NJV Consulting/Rebcon dish at the front and center. The 26m dish at the SARAO Hartebeesthoek site is visible in the background.

The MMS dish was installed in August 2019 by the team led by MMS Director Heinrich Bauermeister and consists of a fine aluminium mesh embedded in fibreglass. The MMS dish can tilt in elevation 30 degrees either side of zenith. “Designing and manufacturing this dish was a serious trade-off between performance and cost. For this reason, the mount was kept as low and simple as possible and the dish itself as thin as possible without compromising too much on performance. The single piece composite material dish does not need any post-manufacturing setup, and the mount is low enough to facilitate easy adjustment of the dish elevation by one person,” said Bauermeister.

The NJV/Rebcon dish was installed in October 2019 by the team led by Warren Butler, who indicated that “team input of the design development was dynamic to incorporate practical solutions regarding assembly/disassembly, transportation, ease of installation on site in a remote location and serviceability of the prototype once installed”.

“The design intent was realised by a form of laser-cut profiled aluminium elements which provided the parabolic accuracy the project required. The appropriate skills and collaboration has resulted in a practical buildable and easily erectable structure, that is fully recyclable,” he added.

The dish is made of aluminium mesh with an aluminium backing structure. Furthermore, it is fixed in azimuth and can tilt in elevation down to the horizon. Of the collaboration between the HIRAX project and NJV Consulting/Rebcon, Linda Ness, Director of NJV Consulting (Pty) Ltd asserted: “Collaboration between designer and fabricator on unusual engineering fabrications at conceptual stage is invaluable, and this was one of those great opportunities. Early interaction like this allows cross-over of skills between the two companies, who have worked together for many years. With multiple units in mind, material optimisation, repeat fabrication and erection are key. Detailed structural modelling analyses and finer stress design work could then be downstream from wholly considered upfront thinking, sketching and deliberation together with the scientists.”

The HIRAX team hopes that these partnerships are the first of many to come between the project and South African industry. In addition to collaborating on HIRAX dish hardware, the project hopes to manufacture some of its subsystems in South Africa, work with local technology companies to develop big data analysis tools, and hire local labour for the deployment of the instrument in the Karoo.

Kavilan Moodley, Principal Investigator of the project and Professor at UKZN, emphasised: “Through these and future collaborations with industry and the scientific community, the project endeavours to build technical capacity nationally as South Africa increases its radio astronomy portfolio through MeerKAT and the development towards the Square Kilometre Array (SKA).”

2) As a national facility, the South African Radio Astronomy Observatory (SARAO) is mandated to support the development and operation of radio astronomy instruments in South Africa. The main HIRAX array will be located within the SARAO Karoo radio observatory site with the status of Guest Instrument, and SARAO staff have been assisting with the establishment of the telescope site, including the completion of legal and planning formalities required to enable construction, and the provision of power, data and other infrastructure required to build and operate the telescope. Engineering and project management support has been provided by SARAO specialists to assist with the definition of system specifications, drafting of project plans and budgets, and the execution of commercial contracts. SARAO will continue as a partner throughout the operational phase of HIRAX.