An international team of astronomers today announced the resolution of a long-standing mystery related to the formation and evolution of galaxies, by discovering vast amounts of hydrogen gas in a galaxy 60 million light years from Earth. Their work, just published in the journal Astronomy & Astrophysics, is based on observations carried out last year with the South African Radio Astronomy Observatory’s new MeerKAT telescope in the Northern Cape. 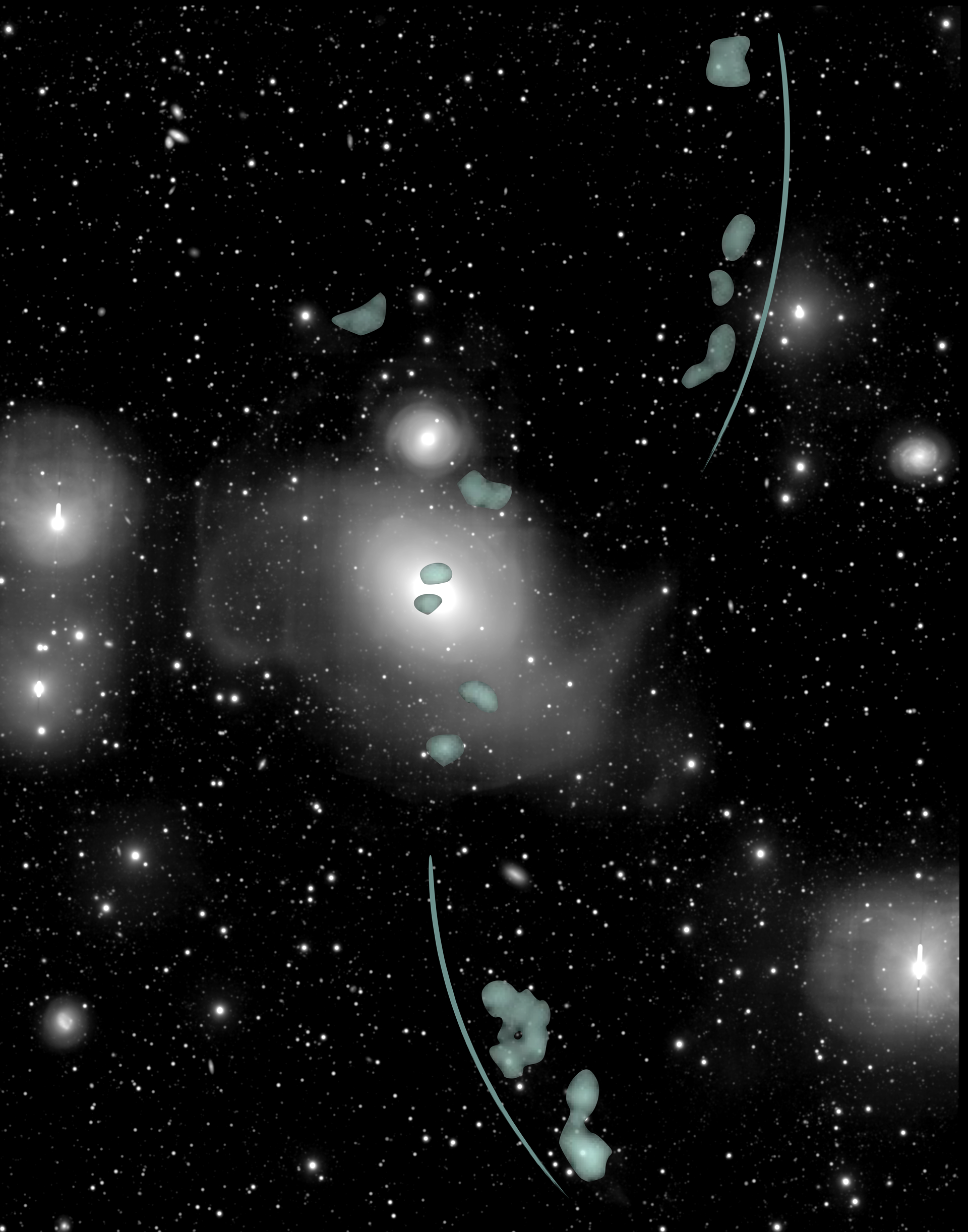 Hydrogen gas (represented by green blobs) detected with SARAO’s MeerKAT radio telescope within and around the galaxy NGC 1316, visible at the centre of the image. The two hydrogen tails newly discovered with MeerKAT are visible in the upper and lower parts of the image (the curved arcs are added to guide the eye). Additional hydrogen clouds near NGC 1316 are also visible. The visible light image in the background is from the Fornax Deep Survey – a Dutch-Italian collaboration led by the University of Groningen and INAF – Naples – and was obtained with the VST telescope at the European Southern Observatory. (Adapted from results presented in Serra et al. 2019.)

NGC 1316, the subject of the new research (funded in part by the European Research Council) is the brightest galaxy at visible wavelengths in a nearby cluster of galaxies located in the direction of the Fornax constellation. It is also known as the radio galaxy “Fornax A”, and is the fourth brightest source of astronomical radio waves in the entire sky.

It is clear from its irregular shape in visible light images that this peculiar galaxy formed through a collision and merger of two major galaxies a few billion years ago, followed by subsequent merging with smaller satellite galaxies. Galaxy merging is one of the cornerstones of modern cosmological theories, and examples such as NGC 1316 are of great importance because they allow astronomers to study in detail the physical processes at work during mergers, and their effect on galaxy evolution.

A decades-long mystery is why NGC 1316 seemed to have so little hydrogen gas, the raw fuel that, present in many galaxies alongside heavier dust grains, ultimately makes up stars throughout the Universe.

“NGC 1316 contains a very large amount of dust in its interstellar medium,” says Paolo Serra of the Italian National Institute for Astrophysics (INAF) – Observatory of Cagliari, and lead author of the new study. It has been generally understood by astronomers that this is due to the nature of the two merging galaxies: one was gargantuan and devoid of much gas or dust, while the other, ten times smaller, was similar to the Milky Way and could bring into NGC 1316 enough dust to explain the observed amount. However, it should also have brought along an even larger amount of hydrogen gas. The problem: so far the vast majority of this hydrogen had never been detected!

“In this article,” continues Serra, “we show new radio images obtained with MeerKAT, which reveal where all that hydrogen was hiding – it’s distributed in two long, faint, gaseous tails, stretching to a large distance from the galaxy”. The radio tails were found at the same location as tails made up of stars discernible in sensitive visible light images. According to Serra, “the tails were generated by tidal forces in action during the merger. The amount of gas found is consistent with that expected based on merger theory, and on the fact that the smallest progenitor galaxy was alike the Milky Way. Thus, thanks to these observations all pieces of the puzzle are now in place, and we finally have a more precise and coherent understanding of the formation of this famous galaxy.”

“With this beautiful piece of work, Paolo and his colleagues, among whom are several young South Africans, have significantly advanced our knowledge of the formation and evolution of galaxies,” says Dr Fernando Camilo, SARAO’s Chief Scientist. “This provides a wonderful taste of what MeerKAT will do in years to come.”

MeerKAT, the South African precursor to the international Square Kilometre Array (SKA), consists of 64 dishes extremely sensitive to radio waves spread over a diameter of eight (8) kilometres in the Karoo. But the configuration of those 64 dishes appears peculiar at first: three quarters are located within a diameter of one (1) kilometre, with the remainder more sparsely spread farther out.

“This was done on purpose,” explains Camilo, “to provide extra sensitivity for detecting the very faint radio signals that hydrogen atoms emit from across the Universe, at a frequency of 1420 megahertz.” “What is also remarkable is that these observations were done with the telescope in its initial commissioning phase, using only 40 of the dishes, before the inauguration in July of last year.” “Results like these,” concludes Camilo, “show that MeerKAT has begun addressing some of the key open questions in modern astrophysics, and we look forward to researchers in South Africa and from around the world joining us on a journey of scientific discovery.”