A very rare event worth observing: Mercury passing across the face of the Sun

The South African Astronomical Observatory (SAAO) will host a transit of Mercury viewing event at the SAAO in Observatory on Monday, 11 November from 14h35 till sunset.

This transit will be visible across the African continent starting at our local time corresponding to 14h35pm South African Standard Time (SAST) and ending at 20h05pm (or sunset, whichever occurs earlier).

Unlike many astronomical phenomena, the transit of Mercury is not visibly spectacular, yet it is worth observing. Mercury will be 195 times smaller than the Sun, a tiny dot passing across the face of the Sun. Observers are encouraged to use telescope projection method for safety since looking directly at the Sun is dangerous. Looking at the Sun directly through a telescope, binoculars or even with the naked eye may cause permanent damage to your eyesight.

Mercury can be seen crossing in front of the Sun about 13 times each Century. Though Mercury orbits the Sun every 88 days, the orbits of Mercury and Earth around the Sun are tilted with respect to each other. Therefore, transits are rare events that occur only when Mercury comes exactly in between the Sun and us.

There have been many published historic observations notably from the Royal Observatory of Cape of Good Hope on 5 November 1868, by William Mann who worked under Sir Thomas Maclear, the Astronomer Royal from 1833-1870.

Thereafter some observations were done on 10 November 1894 from Grahamstown in Eastern Cape as well as on 14 November 1907 from Johannesburg, Gauteng.

Two centuries ago, famous European astronomers traversed the world chasing transits of Venus and Mercury. Initially, this was a quest to measure the Universe sparked by Edmund Halley.

Using the laws of Kepler, “astronomers in the 18th and 19th Century could measure the relative distances between the Sun and all its planets. Meaning, all distances were known only as ratios of each other,” says Dr Niruj Mohan Ramanujam.

It was only by careful timing of the transits of Mercury and Venus from widely separated places on the Earth, that astronomers could measure the actual distances between the planets and the Sun.

According to Sivuyile Manxoyi, the SAAO outreach manager, “There will be a few public viewing locations around the country, the public are encouraged to regularly check our interactive map for locations near them.”

He continued to say, in the Garden Route, the Southern Cape Astronomy Club will set-up an event at Pearly Beach. The Cape Centre of the Astronomical Society of South Africa will be at the Eden on the Bay in Bloubergstrand. The public in Pretoria should go to the UNISA Science Engagement Centre, then in Senekal, Free State, where the Senekal Astronomy Club will coordinate the viewing. In Cape Town, the South African Astronomical Observatory will have a few telescopes on the lawn and webcasting in the auditorium. 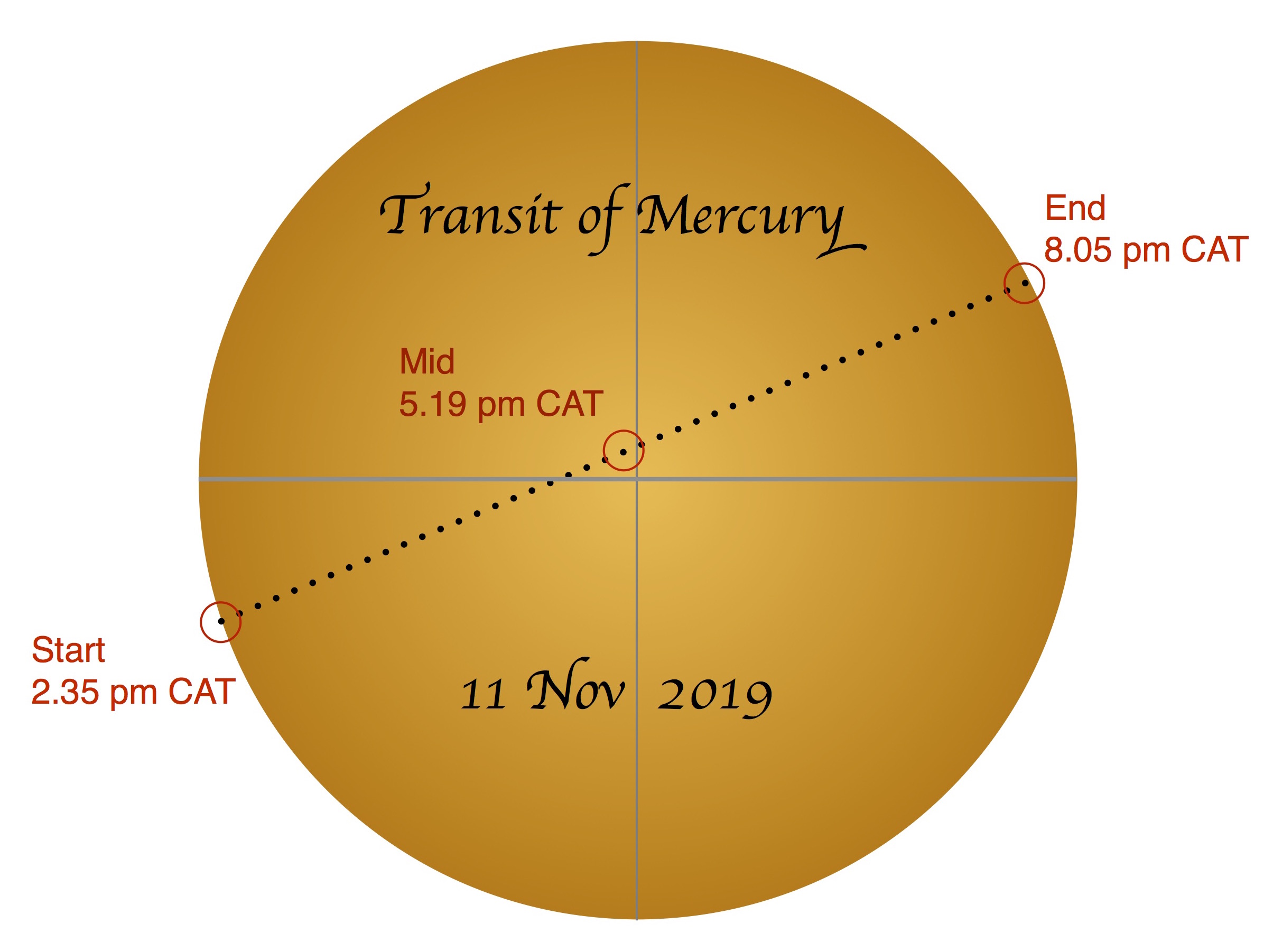