Mosiane, joined the SKA SA in January 2016 as one of 11 Young Professionals Development Programme (YPDP) recruits, and was selected to attend the NASA Frontier Development Lab (FDL) for six weeks until 5 August 2016 in San Francisco, where he is one of 12 individuals who are all planetary and data science graduates, to work on NASA’s asteroid grand challenge together with academic and industry partners. He is one of only three selected from South Africa.

He is also carrying out a masters degree in astrophysics at North West University as part of the SKA SA’s graduate development programme. His work at SKA SA focuses on machine learning applications in detecting and mitigating radio frequency interference.

The six-week long research accelerator, championed by NASA’s Office of the Chief Technologist and hosted at the SETI Institute, is engaging young researchers from around the world to take on one of the truly existential threats to our species.

The NASA FDL brings together a team of postgraduate researchers in data analytics and planetary science and challenging them to think outside the box on the threat of asteroid impacts. The initiative is under the aegis of experts from the space agency and the SETI Institute, with deep-learning expertise contributed by NVIDIA and Autodesk.

Asteroids that collide with Earth are one cosmic danger that it’s now possible to mitigate. In 2013, NASA’s Asteroid Grand Challenge charged participants with identifying all possible asteroid threats, and determining what to do about them. As part of the ongoing challenge, NASA engaged Trillium Technologies to devise a workshop to radically accelerate the development of new analytic tools to aid mitigation of a potential impact. Trillium co-founder and Director, James Parr, describes the concept:

“Grand challenges, such as detecting and characterising the potentially hazardous asteroids we can’t see, demand ingenious new applications of emerging technologies. With FDL, we aimed to create a platform combining emerging talent in machine learning and planetary science to find genuinely new methodologies for planetary defence.”

To this end, young researchers from around the world have gathered at the SETI Institute to brainstorm such matters as new ways to visualise and characterise Near-earth Objects (NEO’s) considered to be potentially hazardous; the benefits of future space missions to both discover and image these objects; how we might better use radar to determine their size and shape; and the possibility of designing specialised drones able to speed the search for landed meteorite fragments that are difficult and time-consuming to find.

“We are delighted to be hosting the FDL research accelerator and providing mentor support in asteroid studies,” notes Bill Diamond, SETI Institute CEO. “This program, involving top postdoctoral researchers in deep learning and planetary science, has the potential to deliver groundbreaking results, and serve as a model for demonstrating the power of public/private partnerships.”

SETI Institute scientists specialising in asteroid and meteor research will be among the mentors for the Lab, as will other experts from NASA and industry. These include the agency’s Deputy Chief Technologist, Jim Adams and its Chief Systems Engineer, Bruce Pittman. Machine learning, a promising capability of today’s advanced computing technology, is expected to be a key tool in addressing the asteroid challenge. Alison B. Lowndes of NVIDIA and Jonathan Knowles of Autodesk are consulting advisors to FDL.

In addition to its utility in coming up with breakthroughs to aid asteroid defence, the FDL Grand Challenge project will provide a meaningful research experience for young scientists and demonstrate the potential of the Frontier Development Lab approach for generating significant new ideas of value to NASA’s mission.

Mosiane was selected to be part of Team New Tools, aimed at creating three-dimensional shape models of asteroids using radar data and optical light curves. The project explores improving the speed and automation of radar shape modeling using machine learning and other techniques.

Originally from Mafikeng in the North West, Mosiane says that he is excited about what he will learn on the programme and being at NASA. “Just going to NASA is an experience in itself. I have been to a lot of science facilities, but going to NASA means that I can see if it really is the organisation dictating space science exploration and if the others are on par with them,” he notes.

Dr Bonita de Swardt, Programme Coordinator for the YPDP, says “We are excited to provide world-class opportunities like this to young graduates in the SKA SA that will further nurture their talent, which can only lead to producing more top South African scientists.” 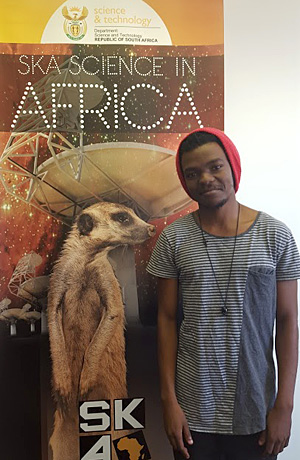