Countries involved in the Square Kilometre Array (SKA) Project have come together in Rome, Italy for the signature of the international treaty establishing the intergovernmental organisation that will oversee the delivery of the world’s largest radio telescope.

Ministers, Ambassadors and other high-level representatives from over 15 countries have gathered in the Italian capital for the signature of the treaty which establishes the Square Kilometre Array Observatory (SKAO), the intergovernmental organisation (IGO) tasked with delivering and operating the SKA.

“South Africa’s signature on the establishment of the SKAO as an intergovernmental legal entity to oversee the construction and operational phases of the SKA project is a crucial milestone and one which should be celebrated. What makes this particularly unique is the fact that for the first time, Africa, Asia, Australasia and Europe, commit at the inter-governmental level to collaborate on a large-scale science project as equal partners,” said Mmamoloko Kubayi-Ngubane, the South African Minister of Science and Technology.

“This represents the start of a new era for global science governance. International cooperation in science plays a crucial role in fostering international friendship and solidarity and bolster commitment to multilateralism which will assist our world in addressing global challenges like poverty, inequality and climate change. The signing of the Convention puts science diplomacy into practice. Already South Africa has delivered on the MeerKat, a pathfinder to the SKA, and our government looks forward to the next phase of this global initiative in building a platform for this extraordinary scientific achievement,” Kubayi-Ngubane continued.

Seven countries signed the treaty today, including South Africa, Australia, China, Italy, The Netherlands, Portugal, and the United Kingdom. India and Sweden, who also took part in the multilateral negotiations to set up the SKA Observatory IGO, are following further internal processes before signing the treaty. Together, these countries will form the founding members of the new organisation.

“Today we are particularly honoured to sign, right here at the Ministry of Education, University and Research, the Treaty for the establishment of the SKA Observatory,” Italian Minister of Education Marco Bussetti who presided over the event, said.

“A signature that comes after a long phase of negotiations, in which our country has played a leading role. The Rome Convention testifies the spirit of collaboration that scientific research triggers between countries and people around the world, because science speaks all the languages of the planet and its language connects the whole world. “This Treaty,” – he added – “is the moment that marks our present and our future history, the history of science and knowledge of the Universe.”

“The SKA project is the icon of the increasingly strategic role that scientific research has taken on in contemporary society. Research is the engine of innovation and growth: knowledge translates into individual and collective well-being, both social and economic. Participating in the forefront of such an extensive and important international project is a great opportunity for the Italian scientific community, both for the contribution that our many excellences can give and for sharing the big amount of data that SKA will collect and redistribute.” 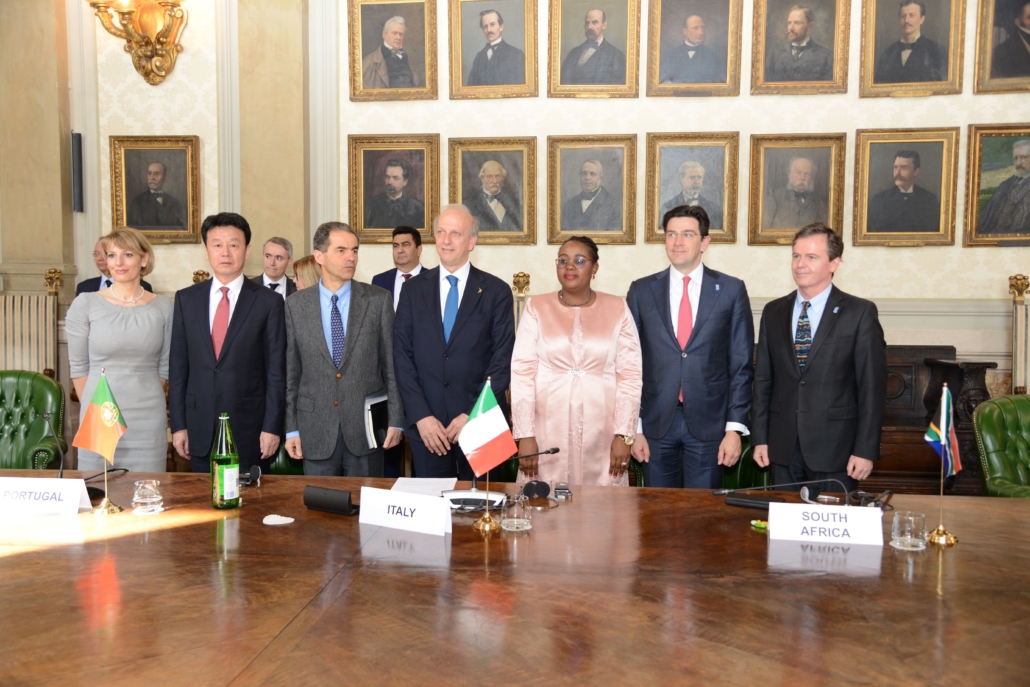 Dr Catherine Cesarsky, Chair of the SKA Board of Directors, added: “Rome wasn’t built in a day. Likewise, designing, building and operating the world’s biggest telescope takes decades of efforts, expertise, innovation, perseverance, and global collaboration. Today we’ve laid the foundations that will enable us to make the SKA a reality.”

The SKA will be the largest science facility on the planet, with infrastructure spread across three continents on both hemispheres. Its two networks of hundreds of dishes and thousands of antennas will be distributed over hundreds of kilometres in Australia and South Africa, with the Headquarters in the United Kingdom.

Together with facilities like the James Webb Space Telescope, CERN’s Large Hadron Collider, the LIGO gravitational wave detector, the new generation of extremely large optical telescopes and the ITER fusion reactor, the SKA will be one of humanity’s cornerstone physics machines in the 21st century.

Professor Philip Diamond, Director-General of the SKA Organisation which has led the design of the telescope added: “Like Galileo’s telescope in its time, the SKA will revolutionise how we understand the world around us and our place in it. Today’s historic signature shows a global commitment behind this vision, and opens up the door to generations of ground-breaking discoveries.”

“South Africa is proud to be one of the countries signing the SKA Convention today. The signing of the Convention formally establishes the Intergovernmental Organisation, which is tasked with the construction and operations of the SKA. South Africa has already made significant contributions to the design of the SKA, particularly via the recently launched MeerKAT telescope, and our participation in the Intergovernmental Organisation will ensure our continued involvement in a project that will push technology boundaries, and quite possibly produce Nobel Prize-winning science,” said Dr Rob Adam, Managing Director of the South Africa Radio Astronomy Observatory.

Two of the world’s fastest supercomputers will be needed to process the unprecedented amounts of data emanating from the telescopes, with some 600 petabytes expected to be stored and distributed worldwide to the science community every year, or the equivalent of over half a million laptops worth of data.

Close to 700 million euros worth of contracts for the construction of the SKA will start to be awarded from late 2020 to companies and providers in the SKA’s member countries, providing a substantial return on investment for those countries. Spinoffs are also expected to emerge from work to design and build the SKA, with start-ups already being created out of some of the design work and impact reaching far beyond astronomy.

Over 1,000 engineers and scientists in 20 countries have been involved in designing the SKA over the past five years, with new research programmes, educational initiatives and collaborations being created in various countries to train the next generation of scientists and engineers.

Guests from Canada, France, Malta, New Zealand, the Republic of Korea, Spain and Switzerland were also in attendance to witness the signature and reaffirmed their strong interest in the project. They all confirmed they are making their best efforts to prepare the conditions for a future decision of participation of their respective country in the SKA Observatory.

The signature concludes three and a half years of negotiations by government representatives and international lawyers, and kicks off the legislative process in the signing countries, which will see SKAO enter into force once five countries including all three hosts have ratified the treaty through their respective legislatures.

SKAO becomes only the second intergovernmental organisation dedicated to astronomy in the world, after the European Southern Observatory (ESO).