Members of the nine Square Kilometre Array (SKA) African partner countries represented by its respective Ministers and Deputy Ministers of Science and Technology concluded the Fourth Ministerial Meeting on the SKA in Accra, Ghana, on 24 August 2017 by signing a memorandum of understanding to collaborate on radio astronomy.

The purpose of the meeting was to consider progress in the development of human capital initiatives, the establishment of relevant institutional arrangements to coordinate and support domestic SKA/African Very Long Baseline Interferometry (VLBI) Network (AVN) related activities, the formulation of new academic programmes around physics and astronomy, site selection and the rollout of high performance computing capabilities.

The meeting expressed appreciation for the progress in the development of the AVN project, particularly with Ghana being the first of the eight partner countries of the AVN to complete the conversion of a communications antenna into a functioning radio telescope.

Radio telescopes naturally produce large quantities of data, in this regard, the meeting agreed that there is a need for advanced computing infrastructure, training and skills development to process the data and to support broad research applications.

Current Big Data initiatives being rolled out in partnership between South Africa and member countries include the work being done by South Africa’s Centre for High Performance Computing (CHPC) which is repurposing HPC systems and channeling them to the AVN partner countries to develop a footprint of high performance computing to be able to process high volumes of data.

Several funding sources for the building of the SKA in Africa are also being considered. These include the European Union for possible support to the African Data Intensive Research Cloud (ADIRC) and the African Renaissance Fund of the South African Department of International Relations and Cooperation (DIRCO) further supporting the AVN. In addition, a possible support through funding proposal-writing workshop will be explored by South Africa through the SADC Secretariat.

On the identification of the location of the second phase of the SKA, partner countries will be engaged through bilateral meetings with the SKA Project Office South Africa in a bid to develop a detailed roadmap beginning 2018.
South Africa will host the next meeting of the Senior Officials and the Ministerial Forum in mid-2018 to coincide with the formal launch of the MeerKAT Telescope, a precursor instrument to SKA.

The SKA will be the world’s largest and most sensitive radio telescope. The total collecting area will be approximately one square kilometre, giving 50 times the sensitivity and 10 000 times the survey speed of the best current-day telescopes. It is being built in Africa and Australia.

Thousands of receptors will extend to distances of up to 3 000 km from the central regions. The SKA will address fundamental unanswered questions about our universe, including how the first stars and galaxies formed after the Big Bang, how dark energy is accelerating the expansion of the universe, the role of magnetism in the cosmos, the nature of gravity, and the search for life beyond Earth.

The SKA Organisation, with its headquarters at Jodrell Bank Observatory, UK, was established in December 2011 as a not-for-profit company in order to formalise relationships between the international partners and centralise the leadership of the project.

The AVN project is currently jointly funded to the tune of R141 million by the African Renaissance Fund of the Department of International Relations and Cooperation and the Department of Science and Technology in South Africa.

Members of the nine SKA African partner countries concluded the Fourth Ministerial Meeting on the SKA in Accra, Ghana by signing a memorandum of understanding to collaborate on radio astronomy. 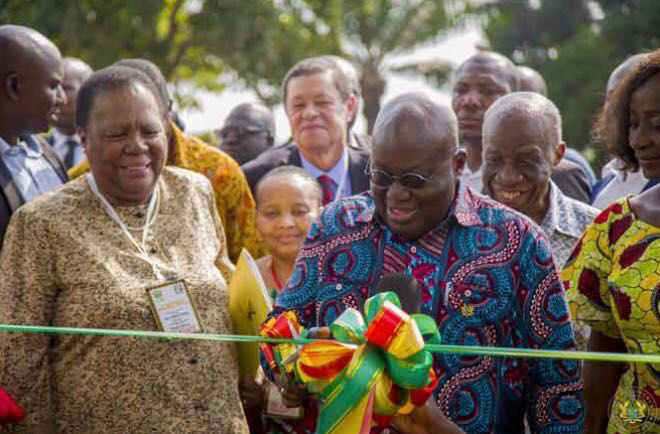 Minister of Science and Technology Naledi Pandor watches on as the President of the Republic of Ghana, His Excellency Nana Addo Dankwa Akufo-Addo cuts the ribbon at the launch of the Ghana Radio Astronomy Observatory.