The MeerKAT First Light image of the sky, released today by Minister of Science and Technology, Naledi Pandor, shows unambiguously that MeerKAT is already the best radio telescope of its kind in the Southern Hemisphere. Array Release 1 (AR1) being celebrated today provides 16 of an eventual 64 dishes integrated into a working telescope array. It is the first significant scientific milestone achieved by MeerKAT, the radio telescope under construction in the Karoo that will eventually be integrated into the Square Kilometre Array (SKA).

In a small patch of sky covering less than 0.01 percent of the entire celestial sphere, the MeerKAT First Light image shows more than 1300 galaxies in the distant Universe, compared to 70 known in this location prior to MeerKAT. “Based on the results being shown today, we are confident that after all 64 dishes are in place, MeerKAT will be the world’s leading telescope of its kind until the advent of SKA,” according to Professor Justin Jonas, SKA South Africa Chief Technologist.

MeerKAT will consist of 64 receptors, each comprising a 13.5-metre diametre dish antenna, cryogenic coolers, receivers, digitiser, and other electronics. The commissioning of MeerKAT is done in phases to allow for verification of the system, early resolution of any technical issues, and initial science exploitation. Early science can be done with parts of the array as they are commissioned, even as construction continues. AR1 consists of 16 receptors, AR2 of 32 and AR3 of 64, expected to be in place by late 2017.

Dr Rob Adam, Project Director of SKA South Africa, says: “The launch of MeerKAT AR1 and its first results is a significant milestone for South Africa. Through MeerKAT, South Africa is playing a key role in the design and development of technology for the SKA. The South African team of more than 200 young scientists, engineers and technicians, in collaboration with industry, local and foreign universities and institutions, has developed the technologies and systems for MeerKAT. These include cutting edge telescope antennas and receivers, signal processing, timing, telescope management, computing and data storage systems, and algorithms for data processing.”

In May 2016, more than 150 researchers and students, two-thirds from South Africa, met in Stellenbosch to discuss and update the MeerKAT science programme. This will consist of already approved “large survey projects”, plus “open time” available for new projects. An engineering test image, produced with only 4 dishes, was made available just before that meeting.

“The scientists gathered at the May meeting were impressed to see what 4 MeerKAT dishes could do,” says Dr Fernando Camilo, SKA South Africa Chief Scientist. “They will be astonished at today’s exceptionally beautiful images, which demonstrate that MeerKAT has joined the big leagues of world radio astronomy”.

Pandor today released the MeerKAT First Light image from the telescope site in the Northern Cape. She was accompanied by Ministers and Deputy Ministers from the Presidential Infrastructure Coordination Committee (PICC), as well as other senior officials.

Minister Pandor says: “South Africa has already demonstrated its excellent science and engineering skills by designing and building MeerKAT. This telescope, which is predominantly a locally designed and built instrument, shows the world that South Africa can compete in international research, engineering, technology and science. Government is proud of our scientists and engineers for pioneering a radio telescope that will lead to groundbreaking research.”

MeerKAT is a precursor to the Square Kilometre Array (SKA) and follows the KAT-7 telescope which was an engineering test-bed for MeerKAT. MeerKAT is funded by the South African Government and is a South African designed telescope with 75% of its value sourced locally. MeerKAT will be an integral part of SKA Phase 1. An important aspect of the SKA site decision in 2012 was that MeerKAT would be part of the sensitive SKA Phase 1 array, which will be the most sensitive radio telescope in the world. Upon completion at the end of 2017, MeerKAT will consist of 64 dishes and associated instrumentation. SKA1 MID will include an additional 133 dishes, bringing the total number for SKA1 MID to 197.

The SKA is an international effort to build the world’s largest radio telescope – one hundred times more sensitive than any current radio telescope. The scale of the SKA represents a huge leap forward in both engineering, and research and development towards building and delivering a unique instrument. As one of the largest scientific endeavours in history, the SKA will bring together a wealth of the world’s finest scientists, engineers and policy makers to bring the project to fruition. SKA will be built in two phases – SKA1 and SKA2 – starting in 2018. SKA1 will include two components – SKA1 MID (to be built in South Africa) and SKA1 LOW (to be built in Australia); they will observe the Universe at different radio frequencies. 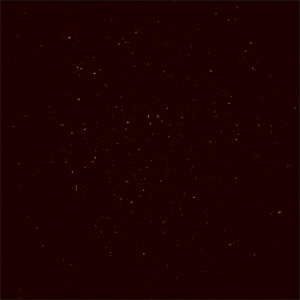 IMAGE 1: MeerKAT First Light image. Each white dot represents the intensity of radio waves recorded with 16 dishes of the MeerKAT telescope in the Karoo (when completed, MeerKAT will consist of 64 dishes and associated systems). More than 1300 individual objects – galaxies in the distant universe – are seen in this image. 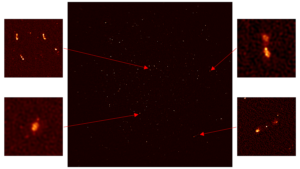 IMAGE 2: Montage of MeerKAT First Light radio image and four zoomed-in insets. The two panels to the right show distant galaxies with massive black holes at their centers. At lower left is a galaxy approximately 200 million light years away, where hydrogen gas is being used up to form stars in large numbers.

IMAGE 3: View showing 10% of the full MeerKAT First Light radio image. More than 200 astronomical radio sources (white dots) are visible in this image, where prior to MeerKAT only five were known (indicated by violet circles). This image spans about the area of the Earth’s moon. 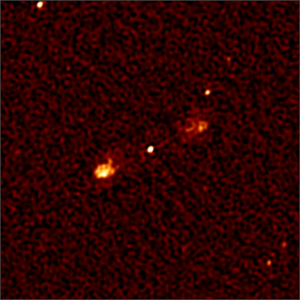 IMAGE 4: Higher-resolution version of lower-right panel in IMAGE 2. This view, covering about 1% of the full MeerKAT First Light image, shows a “Fanaroff-Riley Class 2” (FR2) object: a massive black hole in the distant universe (matter falling into it produces the bright dot at the center) launching jets of powerful electrons moving at close to the speed of light that emit radio waves detected with MeerKAT’s sharp view of the radio sky (thin lines connecting the central dot to the brighter lobes of radio emission).