South Africa’s Dr Bernie Fanaroff, previous director of SKA South Africa, which included the design and construction of the MeerKAT radio telescope, was among fifty eminent scientists inducted as a Fellow of the prestigious Royal Society, in a ceremony in London, on 12 July 2019.

The Royal Society was established in London in 1660 and is the oldest scientific society in the world. A Fellowship of the Royal Society is awarded to individuals who have made a “substantial contribution to the improvement of natural knowledge, including mathematics, engineering science and medical science” and last Friday, Dr Fanaroff signed the same membership book as Isaac Newton, Robert Hook, Charles Darwin, Albert Einstein and Stephen Hawking.

Dr Rob Adam, Managing Director of the South African Radio Astronomy Observatory acknowledged Dr Fanaroff’s achievement: “I want to congratulate Bernie, whom I have known and worked with in several contexts for many years, particularly in realising the SKA for South Africa. Bernie’s induction as a Fellow to the Royal Society is well deserved recognition of his contribution to science, and society.”

Dr Fanaroff was originally a radio astronomer and co-author of the Fanaroff-Riley classification of radio galaxies and quasars. Thereafter he was a metal industry union organiser, Head of the Office for the Reconstruction and Development Programme and Deputy Director General in President Mandela’s Office. He chaired the Integrated Justice System Board, and the Inter-departmental committee on border control. From 2003 to 2015, Dr Fanaroff directed the SKA project in South Africa, which resulted in South Africa winning the bid to host the SKA, and the successful design and construction of the MeerKAT radio telescope. In recognition of all his achievements Dr Fanaroff has been awarded the Order of Mapungubwe, the Karl G Jansky Lectureship, Lifetime Achievement award of the National Research Foundation, Academy of Science of South Africa Science-for-Society Gold Medal, award for Science Diplomacy from the Minister for Science and Technology, and the President’s Award of the SA Institute of Electrical Engineers. Manchester University has inaugurated the Fanaroff Lecture series, and he is co-chair of the BRICS working group on high-performance computing, and a trustee of the Paleontological Scientific Trust. Recently, Dr Fanaroff has became member of the Presidential Commission on the Fourth Industrial Revolution.

Dr Fanaroff said that his appointment as a Fellow of the Royal Society is something he had never expected, or believed possible, and is deeply honoured to belong to such a prestigious group of scientists. He says his election is also recognition of the outstanding ability and performance of the SKA team in South Africa, and reflects the strong state of astronomy and technology in the country. 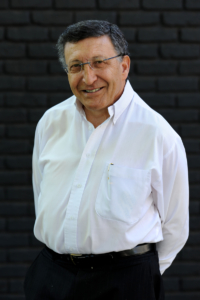 Dr Bernie Fanaroff, previous director of SKA South Africa, which included the design and construction of the MeerKAT radio telescope, was among fifty eminent scientists inducted as a Fellow of the prestigious Royal Society, in a ceremony in London, on 12 July 2019.