SKA Global Headquarters – A consortium of French research institutes and industry has become the 12th member of the SKA Organisation following approval of its accession by the SKA Board of Directors.

The decision to accept the request of CNRS, Europe’s largest research organisation, for membership was taken at the 27th meeting of the SKA Board of Directors in Cape Town, South Africa.

“We are delighted to welcome these leading French institutes to the SKA Organisation”, said Chair of the SKA Board of Directors Dr. Catherine Cesarsky. “France is a major player, with a long tradition of astronomy and radio astronomy. Their accession is testament to the growing international interest in the SKA project, which is progressing in leaps and bounds.”

Dr. Chiara Ferrari, Director of Maison SKA-France added: “We are thrilled to have reached this critical step. Momentum has been building steadily in France over the past few years with strong interest from major industry players, but also from the science community and major institutions like CNRS.”

France has already contributed greatly to the SKA project as an observer country, with its engineers participating in several of the international design consortia, and French researchers being involved in all 11 of the SKA’s Science Working Groups.

The momentum towards membership has gathered pace in recent months, with the SKA being featured as a project on the French national research infrastructure roadmap, published by the Ministry of Higher Education, Research and Innovation in May. Last year also saw the publication of the French SKA White Book, highlighting France’s research interests in the SKA.

Dr. Michel Pérault, who has been the observer from CNRS in the SKA Board of Directors, added: “We’ve worked hard to get to this point over the last few years making this news extremely satisfying. We look forward to further increasing our involvement and submit a convincing funding case to the French government, that would secure industrial participation from French companies in the construction and operation of the SKA, and access to the telescope for our scientists.”

France has a 70-year history of radio astronomy, and its Nançay Radio-astronomy Station is home to antennas of an International LOFAR station and of the New Extension in Nançay Upgrading LOFAR (NenuFAR), both SKA pathfinder facilities. Another SKA pathfinder, the Electronic MultiBeam Radio Astronomy ConcEpt (EMBRACE), which demonstrates the design readiness of phased array technology for the SKA, has a station at Nançay. It is also the site of the famous Nançay Radio Telescope (NRT), inaugurated in 1965 by President Charles De Gaulle, which remains a first-class facility and is today engaged in observations of galaxies, comets and pulsars. France has also been instrumental in the development of millimetre radio-astronomy with the construction and operations of IRAM observatory with its partners and its later participation to ALMA through ESO.

The Square Kilometre Array (SKA) project is an international effort to build the world’s largest radio telescope, led by the SKA Organisation based at the Jodrell Bank Observatory near Manchester, UK. The SKA will conduct transformational science to improve our understanding of the Universe and the laws of fundamental physics, monitoring the sky in unprecedented detail and mapping it hundreds of times faster than any current facility.

The SKA is not a single telescope, but a collection of telescopes, called an array, to be spread over long distances. The SKA will be constructed in Australia and South Africa; with a later expansion in both countries and into other African countries.

Already supported by 12 countries – Australia, Canada, China, France, India, Italy, the Netherlands, New Zealand, South Africa, Spain, Sweden and the United Kingdom – the SKA Organisation has brought together some of the world’s finest scientists, engineers and policy makers and more than 100 companies and research institutions in the design and development of the telescope. 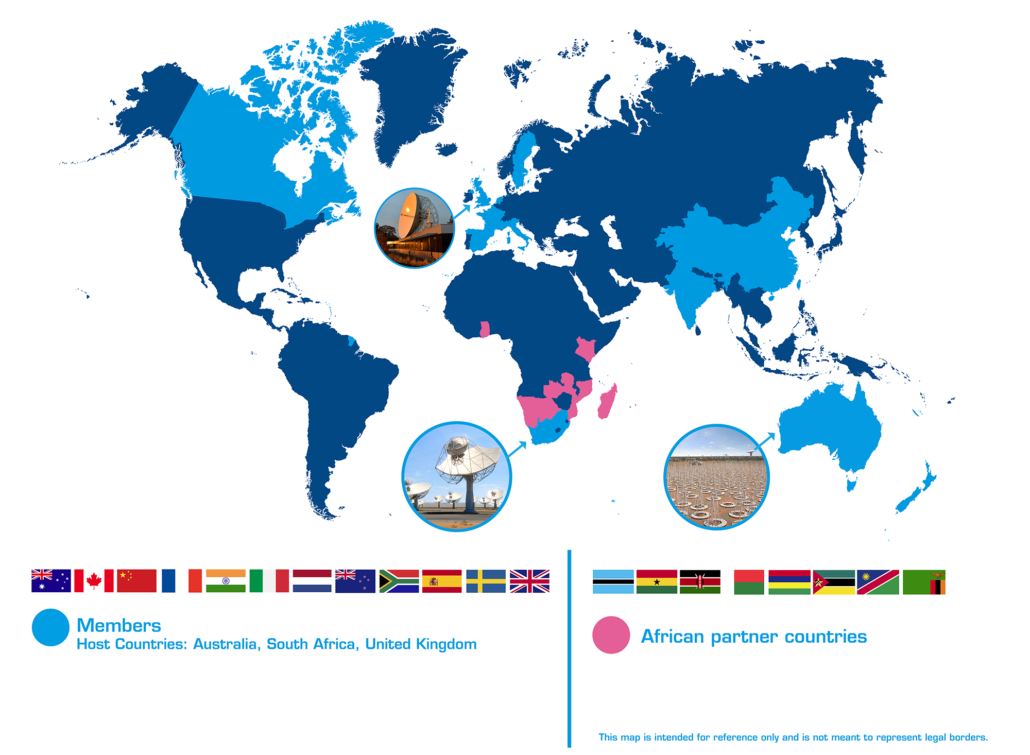 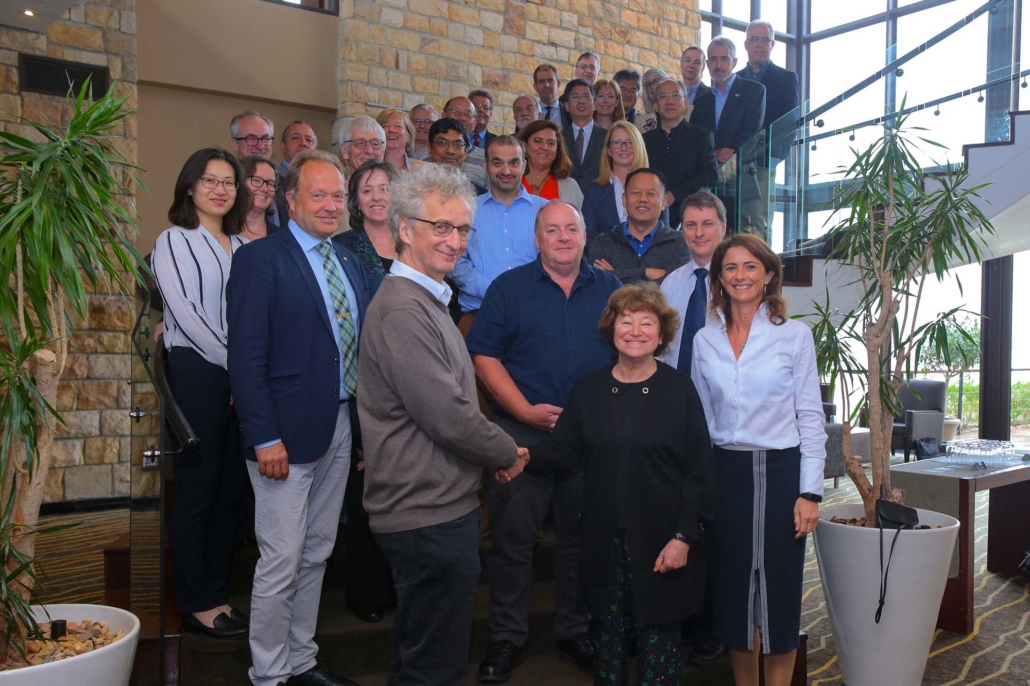 Chair of the SKA Board of Directors Dr Catherine Cesarsky shakes hands with French representative Michel Pérault, marking the occasion with members of the Board and observers.