Dr Kenda Knowles, a Claude Leon postdoctoral researcher at the University of KwaZulu-Natal’s Astrophysics and Cosmology Research Unit, has found evidence for a new radio halo in a low-mass galaxy cluster. Her paper on the detection, based on her PhD thesis work, was published this month in “Monthly Notices of the Royal Astronomical Society”, an international peer-reviewed astronomy journal.

Radio halos are large regions in clusters of galaxies which emit radio waves. To date, they are only found in a small fraction of merging galaxy clusters and are transient objects, with the radio emission brightening during the merger and then fading away on timescales of a few billion years. Due to the radio emission being very faint, they require sophisticated data processing techniques to detect.

Dr Knowles, who received her PhD from UKZN earlier this year with funding from the Square Kilometre Array South Africa bursary programme, said

“Radio halos are fascinating objects to study as they probe the non-thermal components of galaxy clusters, such as magnetic fields, which are difficult to study at other astronomical wavelengths. Their link to merging activity of the host galaxy cluster makes them a powerful tool to investigate the physical processes that occur during these energetic events.”

Dr Knowles and her collaborators used data from the Giant Metrewave Radio Telescope in India to detect a region of very faint, diffuse radio emission in one of their target galaxy clusters. The emission was classified as a radio halo based on its physical properties, making this galaxy cluster one of the lowest-mass systems known to host a radio halo. The sample of galaxy clusters targeted by Dr Knowles was discovered by the Atacama Cosmology Telescope in Chile, a project in which the UKZN group is closely involved.

“We targeted this galaxy cluster because we knew it was undergoing a merger, based on existing X-ray observations, which gave it a better chance of hosting a radio halo”, said Dr Knowles, winner of a 2015 DST Women in Science Doctoral Fellowship. She added that although the detection itself is quite exciting, the new aspect of their paper is the estimation of a timescale for the radio emission.

Using multiwavelength data from X-ray and optical telescopes, they created a model of the cluster merger and used it to estimate the duration of the merger. Comparing this to computer simulations they were able to estimate at what point in its lifetime the radio halo was being observed. Professor Kavilan Moodley at UKZN, a co-author on the paper and Dr Knowles’ PhD thesis advisor, commended her work. “By combining observations of this galaxy cluster from telescopes operating at three different wavelengths, Kenda was able to deduce that the radio halo we detected is a relatively young one, and has still to reach its maximum power,” he said.

The MeerKAT telescope being built by SKA South Africa in the Northern Cape will allow for exciting new developments in this area of research because it will provide excellent sensitivity to faint sources and the opportunity to make many new detections of radio halos. 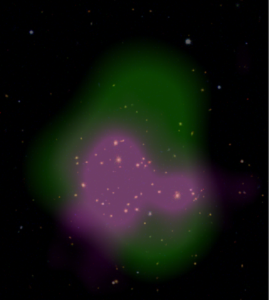 Composite image of the cluster region showing data from three different wavelengths. The background colour image shows the galaxies (optical) in the region, with those belonging to the cluster appearing yellow. The hot cluster gas (X-rays) is overlaid in pink, and the newly detected radio halo in green. By combining the information from these datasets, Dr Knowles was able to estimate for how long the cluster has been merging, and at what stage of its evolution the radio halo is being observed. 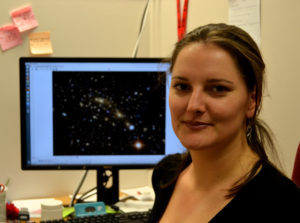