A team from Carnarvon Primary School took third place in the Virtual Gear Robotics Competition which was held in earlier this month.

Teen Titans, with members Juvandré Andreas and Chevandré Tieties, both in Grade 7, participated in the First Timers category, which is for teams where none of the team members has ever competed in a LEGO robotics competition. This category provides an encouraging and non-threatening environment for learners who are new to robotics. All robot design and competition runs were performed locally and were video recorded.

Teen Titans scored an overall total of 262 points, of which 35 points were for the trial run, 42 for the Engineering Design video submitted, 105 points in round one, and 80 points in round two. View the video here.

The Virtual GEAR competition is designed for teams that cannot/do not want to travel to an on-site GEAR competition and broadens participation to an international audience. Robots are designed and tested locally. Teams create and upload videos demonstrating their robots’ performance and explaining their engineering design process.

Teen Titans competed against the Young Spanners from Laerskool Wierdapark in Centurion, Gauteng and the Deutsche Schule Pretoria in Pretoria. These teams took first and second place respectively.

The learners are supported through the SKA SA Schools Outreach Programme. 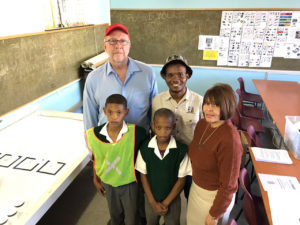