An international team of astronomers has published the most sensitive images of the Universe ever taken at low radio frequencies, using the International Low Frequency Array (LOFAR).

The software needed to do this, specifically that which handles the direction-dependent effects that would otherwise contaminate the images, goes back to the work of a former Rhodes University Postdoc Dr Cyril Tasse, who remains an honorary research associate of the University, and Prof. Oleg Smirnov, SKA (Square Kilometre Array) Chair in Radio Astronomy Techniques and Technologies at Rhodes University and Head of the Radio Astronomy Research Group at SARAO.

By observing the same regions of sky over and over again and combining the data to make a single very-long exposure image, the international team has detected the faint radio glow of stars exploding as supernovae, in tens of thousands of galaxies out to the most distant parts of the Universe. A special issue of the scientific journal Astronomy & Astrophysics is dedicated to 14 research papers describing these images and the first scientific results. 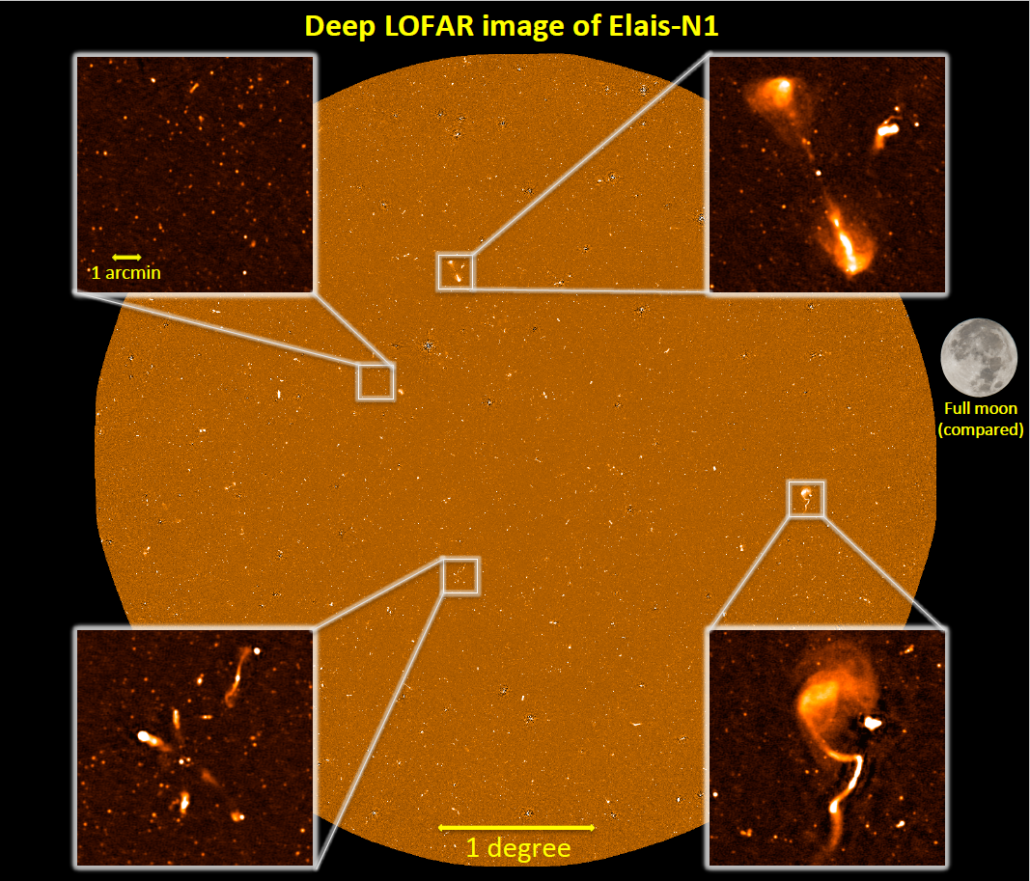 The image shows the deepest LOFAR image ever made, in the region of sky known as ‘Elais-N1’, which is one of the three fields studied as part of this deep radio survey. The image arises from a single LOFAR pointing observed repeatedly for a total of 164 hours. Over 80,000 radio sources are detected; this includes some spectacular large-scale emission arising from massive black holes, but most sources are distant galaxies like the Milky Way, forming their stars.

“At LOFAR frequencies, observing the sky is like lying on the bottom of a swimming pool looking up, trying to make out patterns on the ceiling through the choppy water (the “water” being the ionosphere). Some very clever software was required to achieve this,” said Prof. Smirnov.

A collaboration between the two academics led to a paper describing the maths (Smirnov & Tasse 2015, MNRAS), and to the DDFacet/killMS software packages that Dr Tasse led the development of over the years. These packages are now at the heart of LOFAR data processing.

“We quickly realised the same software can also be used to make MeerKAT images better, and several young researchers from Rhodes University and SARAO also became involved in this project with Dr Tasse,” explained Prof. Smirnov.

According to Prof. Philip Best from the University of Edinburgh, UK, who led the deep survey, “When we look at the sky with a radio telescope, the brightest objects we see are produced by massive black holes at the centre of galaxies. However, our images are so deep that most of the objects in it are galaxies like our own Milky Way, which emit faint radio waves that trace their on-going star-formation.”

“The combination of the high sensitivity of LOFAR and the wide area of sky covered by our survey – about 300 times the size of the full moon – has enabled us to detect tens of thousands of galaxies like the Milky Way, far out into the distant Universe. The light from these galaxies has been travelling for billions of years to reach the Earth; this means that we see the galaxies as they were billions of years ago, back when they were forming most of their stars.”

Dr Isabella Prandoni of INAF Bologna, Italy added: “Star formation is usually enshrouded in dust, which obscures our view when we look with optical telescopes. But radio waves penetrate the dust, so with LOFAR we obtain a complete picture of their star-formation.” The deep LOFAR images have led to a new relation between a galaxy’s radio emission and the rate at which it is forming stars, and a more accurate measurement of the number of new stars being formed in the young Universe.

The remarkable dataset has enabled a wide range of additional scientific studies, ranging from the nature of the spectacular jets of radio emission produced by massive black holes, to that arising from collisions of huge clusters of galaxies. It has also thrown up unexpected results. For example, by comparing the repeated observations, the researchers searched for objects that change in radio brightness. This resulted in the detection of the red dwarf star CR Draconis. Dr Joe Callingham of Leiden University and ASTRON, noted that “CR Draconis shows bursts of radio emission that strongly resemble those from Jupiter, and may be driven by the interaction of the star with a previously unknown planet, or because the star is rotating extremely quickly.”

LOFAR does not directly produce maps of the sky; instead the signals from more than 70,000 antennas must be combined. To produce these deep pictures, more than 4 petabytes of raw data – equivalent to about a million DVDs – were taken and processed. “The deep radio images of our Universe are diffusely hidden, deep inside the vast amount of data that LOFAR has observed,” said Dr Tasse, who is currently based at Paris Observatory, France. “Recent mathematical advances made it possible to extract these, using large clusters of computers.”

“LOFAR is unique in its ability to make high-quality images of the sky at metre-wavelengths,” said Prof. Huub Röttgering of Leiden University, who is leading the overall suite of LOFAR surveys. “These deep field images are a testament to its capabilities and a treasure trove for future discoveries.”

Looking ahead, Prof. Smirnov concluded, “I’m very excited to see what we find when we keep applying the same techniques to MeerKAT, which is an even more sensitive telescope, and will show us even more. The depth and breadth of the window on the Universe that these observations open up is simply unprecedented, so we can expect waves of exciting new results going forward.”

LOFAR is the world’s leading telescope of its type. It is operated by ASTRON, the Netherlands Institute for Radio Astronomy, and coordinated by a partnership of 9 European countries: France, Germany, Ireland, Italy, Latvia, the Netherlands, Poland, Sweden and the UK. In its ‘high-band’ configuration, LOFAR observes at frequencies of around 150 MHz – between the FM and DAB radio bands.

The International LOFAR Telescope is a trans-European network of radio antennas, with a core located in Exloo in the Netherlands. LOFAR works by combining the signals from more than 70,000 individual antenna dipoles, located in ‘antenna stations’ across the Netherlands and in partner European countries. The stations are connected by a high-speed fibre optic network, with powerful computers used to process the radio signals in order to simulate a trans-European radio antenna that stretches over 1300 kilometres. The International LOFAR Telescope is unique, given its sensitivity, wide field-of-view, and image resolution or clarity. The LOFAR data archive is the largest astronomical data collection in the world.

LOFAR was designed, built and is presently operated by ASTRON, the Netherlands Institute for Radio Astronomy. France, Germany, Ireland, Italy, Latvia, the Netherlands, Poland, Sweden and the UK are all partner countries in the International LOFAR Telescope.

Additional images and videos are available at www.lofar-surveys.org/deepfields.html, which also hosts the papers, deep images and catalogues released today.

More information about the LOFAR Surveys can be found at www.lofar-surveys.org.

A range of LOFAR images and videos are available at www.lofar-surveys.org/gallery_preview.html

More information about the LOFAR Surveys can be found at www.lofar-surveys.org

A range of LOFAR images and videos are available at www.lofar-surveys.org/gallery_preview.html